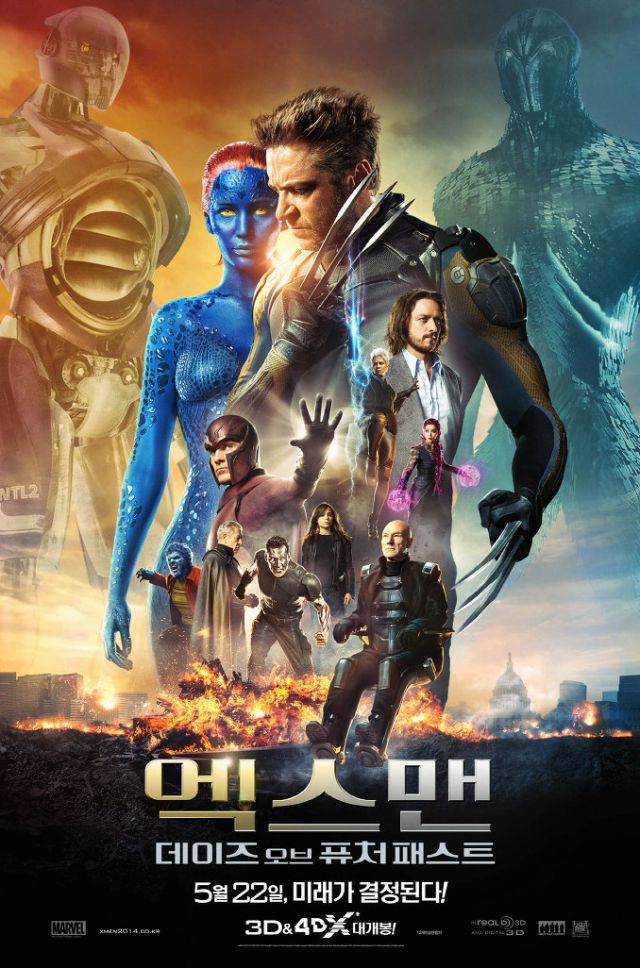 Last weekend Kim Dae-woo's "Obsessed" and the latest "Godzilla" flick slugged it out at the top as Korean cinephiles were torn between a local delight and a potentially impressive alien invasion. This week, however, saw the release of the much anticipated "X-Men: Days of Future Past", a comic-inspired event that promptly settled last week's tussle by snatching over 64% of the box office pie. Marvel's mutants mounted an all-out assault and forced the rest of the pack to scramble for stubs, resulting in a landslide victory as it pooled support from over a 1,000 screens nationwide.

Last week Kim Dae-woo's romantic drama "Obsessed" opened its account with over 445K admissions; a healthy start considering it was up against the gargantuan stub-guzzler "Godzilla" (which has already grossed over $315M worldwide). This week "Obsessed" claimed just 231,510 (10%) to advance its total tally to 1.1M, while the American monster re-make tumbled all the way to fifth with an unimposing 77K (3.4%). Indeed, Marvel's latest mutant outing did abruptly settled matters, and left the rest of the weekend's contenders to count their blessings as it gorged itself on the bulk of the bucks.

Director Chang's "The Target" (116K – 4.8%) and the sci-fi thriller "Transcendence" (113K – 4.9%) followed in third and fourth respectively despite the chaos around them. Wally Pfister's "Transcendence" generated a lot of buzz before its release through its intriguing premise and A-list cast, but has subsequently been snubbed and criticised for over-reaching somewhat. Koreans have shown some interest there, but beyond those curious few its run thus far been flat. "The Target", on the other hand, has quietly amassed a healthy sum of over 2.5M ($21.2) despite not having occupied pole position once during its three-week run.

Lee Jae-gyoo's historical drama "The Fatal Encounter" (starring, among others, Hyun Bin, Jung Jae-young, and Jo Jung-suk) sprinted to over 3 million admissions, but then battled to find further traction as the brutal box office lifecycle brought in fresh blood for the hungry masses. This past weekend the film claimed an additional 66K (2.7%) over 311 screens to bring its total tally now to 3.8M ($28.8M), further securing its place as the third highest-grossing Korean film of the year. Marvel's monopoly meant that newcomer "A Girl at My Door", by director/writer July Jung, found it difficult to stake its claim. Still, Jeong's debut drama opened to over 310 screens around the country and enjoyed a welcoming party 56K (2.4%) strong.

The American comedy drama "Her" and the Spanish horror El cuerpo ("The Body") also made their way to Korean shores, but both found it hard going and came away with 46K (2.1%) and 37K (1.5%) for eighth and ninth place. Lastly, the animated antics of "Rio" rounded out the weekend's top flicks with 32K admissions, bringing its total haul in Korea now to just under 750K.