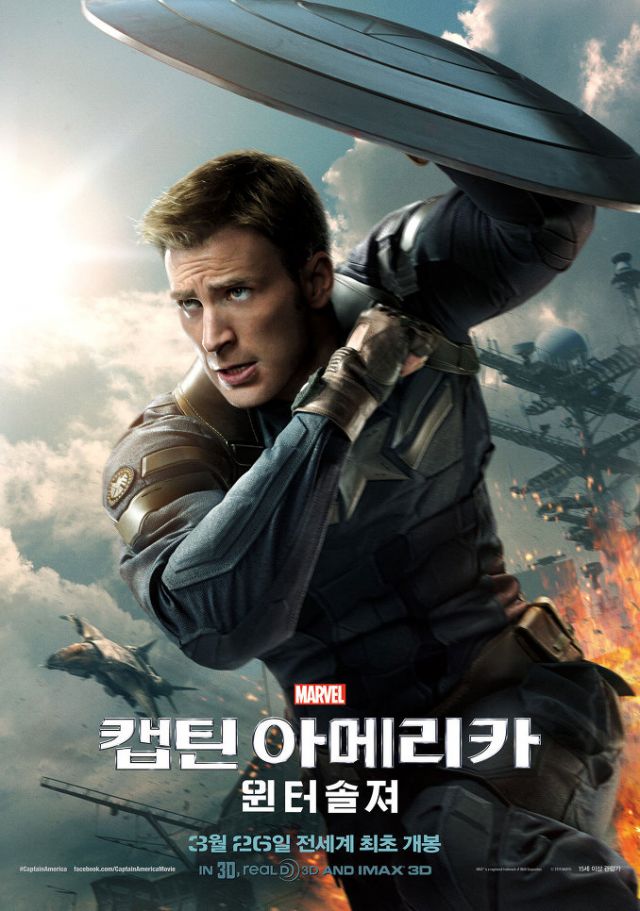 Darren Aronofsky's "Noah" sunk to second as Marvel's "Captain America: The Winter Soldier" rallied 1.1M admissions to its cause. The American superhero opened to a massive 1,106 screens to capture 61% of the market and dislodge the biblical epic from pole position. Last weekend "Noah" opened its account with 950K, but was unable to see out the storm and managed just 326,746 (16.6%) stubs here in week two. Only three local films featured in the top ten ("Thread of Lies", "Miss Granny", and "Monster - Movie") as Korea's volatile box office continued its fickle favouring of new entries.

For the past seven weeks the Korean box office has favoured a new flick every week, with the Oscar-winning "Frozen" being the last film to claim a second reign. "Pompeii", "Non-Stop", "300: Rise of an Empire", "Thread of Lies", and "Noah" have all been given the crown but none have been able to secure a second term. "Captain America: The Winter Soldier" will hope to change that fact as it claimed the largest piece of the box office pie since "The Face Reader" back in September 2013.

The second instalment of "Captain America" held a firm monopoly on the ticket tallies, leaving the lower half to squabble over the remaining stubs. The Chinese/Japanese animation "The Tibetan Dog" dashed in and scurried away with 15K (0.7%) in seventh position, and the computer-animated "Jungle Master" swung into eighth with just 9K (0.4%). Rounding out this weekend's lopsided chart were the local films "Miss Granny" and "Monster - Movie", which brought in 8K and 7.6K respectfully. Hwang Dong-hyuk's "Miss Granny" has stuck around in the top ten now for an age-defying ten weeks now. It's an incredible stint that has seen the drama collect an impressive 8.6M admissions ($58.8M) and is comfortably the highest grossing Korean film of the year thus far.