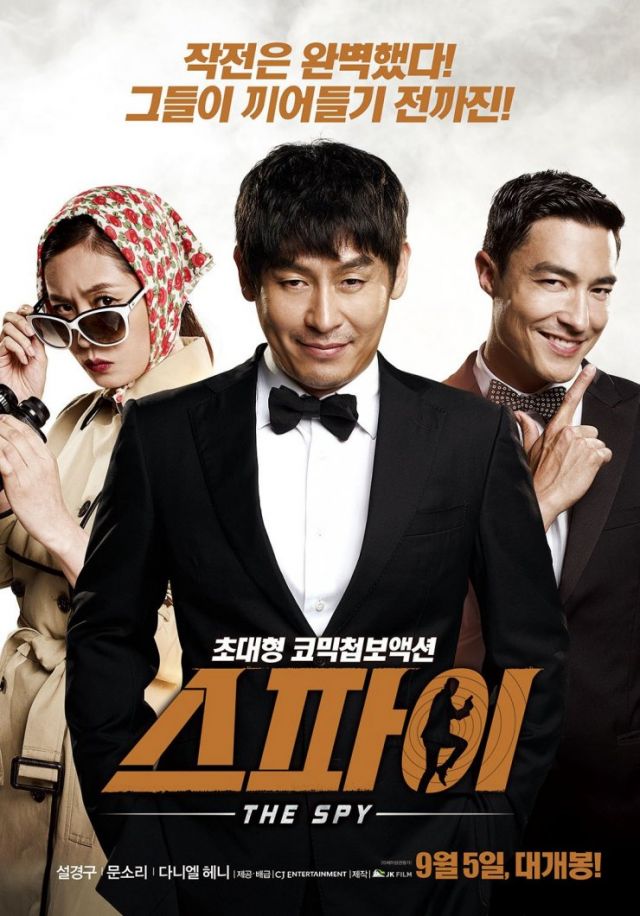 Lee Seung-joon-I's action comedy "The Spy" displaced the French-American caper thriller "Now You See Me See" as Korea's top film this past weekend. "The Spy", Lee's debut feature, claimed 842,457 admissions over 786 screens around the country, dominating proceedings by snatching 44.81% of the weekend's ticket sales. The film was unchallenged at the top, with second place, held by Louis Leterrier's "Now You See Me", scoring just 265,347 (14%) over 414 screens. "The Spy" may be Lee's first feature in the director's chair, but he has worked on a number of successful films in the past, including the disaster epic "Haeundae" and the fast-paced action flick "Quick". Other Korean features such as "Hide and Seek", "Snowpiercer" and "The Flu" continued to stockpile ticket stubs, while Kim Ki-duk's disturbing domestic drama "Moebius" managed to secure a top ten finish in its first weekend out.

Huh Jung's "Hide and Seek", another Korean debut feature, remained unmoved in third with 226,673 (12.26%) admissions. Huh wrote and directed his first feature, and has seen his project climb to 5.5 million admissions; a tally that now threatens "The Terror Live" for fifth place in the list of the highest grossing Korean films of the year. August was a record-breaking month for Korea's box office as local blockbusters, spearheaded by the country's top talents, gave the Korean public a few excellent reasons to head to the theatres with their hard-earned won. That support has been extended to new directors like Huh and Lee whose films have been warmly welcomed by moviegoers around the country. It's still early days for Lee's "The Spy", but already these two young filmmakers have snagged more the 6.5 millions admissions between them. It's a fantastic sign and speaks to the filmmaking talent Korea continues to produce, as well as a public that will happily reward quality features when they arrive.

Bong Joon-ho's "Snowpiercer" is enjoying its sixth week out on circuit and now has over 9 millions admissions from Korean audiences alone. This past weekend saw the film claim seventh with 52,660 (2.9%) over 182 screens, and Bong's post-apocalyptic epic now sits just behind "Miracle in Cell No.7" (12.8 million admissions) in the list of Korea's most successful films of the year. The international community was plagued by reports that Bong's feature was going to be heavily cut for its international release, however Bong has dismissed the rumours as false so fans can breath easy there. Just behind "Snowpiercer" with 32,157 (1.7%) was Kim Seong-su's "The Flu" starring Jang Hyuk, Soo Ae, and the young Park Min-ha. "The Flu" was released halfway through last month and since then it has amassed 3.1 million admissions.

The first of August's money-makers to fall out of the top ten was "The Terror Live" by Kim Byeong-woo. Last weekend Kim's film came in eighth with 58,107, however the film managed just 9,662 this past weekend. Kim won't mind too much though, as the film earned the interest of more than 5.5 million moviegoers during its five weeks in the top ten. If Kim has anyone to blame for his features ejection, it would be Kim Ki-duk and his disturbing new film "Moebius". "Moebius" was, after multiple rounds of edits, official released last week and managed to score 16,611 (0.9%) admissions, a tally which was good enough to round out this week's list. Kim Ki-duk previous feature "Pieta" contained some disturbing footage and themes, and his latest feature continues in the same vein as Kim continues to deal in nightmares and madness.