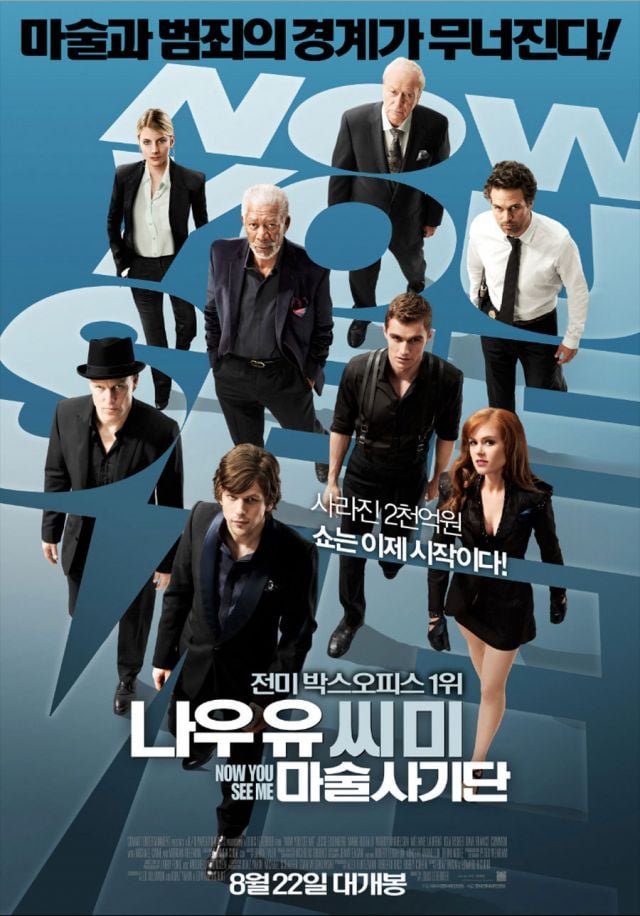 The French-American caper thriller "Now You See Me" walked away with the bulk of the ticket sales this past weekend, displacing the Korean features and their impressive reign during the month of August. Louis Leterrier's internationally cast hit claimed 626,867 (25%) in a tightly contested scrap at the top, bring its total tally in Korea to over 2 million admissions. Huh Jung's "Hide and Seek" narrowly missed out on a third consecutive top finish, but did manage to add 563,251 (22.8%) ticket stubs. Huh's debut film has now collected over 5 million admissions since its release earlier this month.

August was an extremely busy month at the concession stand that left four Korean features panting and exhausted after an intense and lucrative reception from the summer crowds. Bong Joon-ho's "Snowpiercer" (9.1M) led the way early, and together with Kim Byeong-woo's "The Terror Live" (5.5M) the films said good-bye to August with more than 14 million admissions between them. The month's second act came in the form of Kim Seong-su's disaster drama "The Flu" (3M), however it was the debutant Huh Jung and his domestic thriller "Hide and Seek" that kept the ticket traffic heavy. Huh attracted more than 5 million hungry moviegoers to his first outing, a haul that now places "Hide and Seek" (5M) as the seventh highest grossing local release of the year.

"Now You See Me" was not the only foreign entry at the top, however, and was closely tailed by the science fiction action-thriller "Elysium". Directed by Neill Blomkamp (the co-writer/director of "District 9"), "Elysium" stars Matt Damon and Jodie Foster and claimed 573,387 admissions in its first weekend out. "Jobs" (123,952) and the sequel animation "Despicable Me 2" (80,292) took up position behind "Snowpiercer" at sixth and seventh, while "Dragon Ball Z: Battle of Gods" (28,727) and "Epic" (18,656) bought in the rear behind "The Terror Live". "Epic" was ejected from the list last week, but makes a return here to move within striking distance of a million admissions.

The only other Korean films to feature in August's top ten were "Cold Eyes" (5.5) and "Mr. Go" (1.3M), the rest of the spots fell to an interesting mix of foreign features. There were a host of worthwhile foreign features released in Korea this past month, but only a few where able to secure their place. A fair chuck of these were animations, the kids need something to watch after with all the restricted features flying around, and with Kim Ki-duk's "Moebius" just around the corner that trend may continue for a little while still.