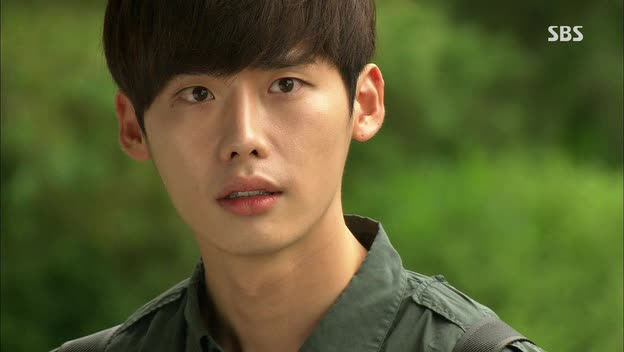 Lee Jong-suk is a young star who skyrocketed to Hallyu fame after his leading role in KBS's fifth installment of its School franchise, "School 2013". What makes him worthy of such star power is not only his good looks, but his versatility in acting.

He started out in film and slowly worked his way up from minor roles in films dramas like "Prosecutor Princess" and "Secret Garden" to the meaty first lead in "School 2013", "I Hear Your Voice", and the presently airing "Doctor Stranger". Even in smaller roles he stands out. In "Secret Garden" he played a secondary character: a talented young composer with a surly attitude and a forbidden crush on the second male lead, Oska played by Yoon Sang-hyun. It was in this that I first took notice of him and how he held his own with seasoned actors like Sang-hyeon.

What makes Jong-suk such a powerful actor is his ability to increase or decrease the tension in a scene with the look in his eyes and with how he holds his body. He needs no words. As the gay composer, Han Tae-seon, in "Secret Garden", Jong-suk was constantly glaring and in a foul-temper, skulking about like the moody teenager the character was. However, rather than seeming like just another petulant teenager, Jong-suk played the small roll with enough depth to show us that there was a lot behind the nasty attitude. It was in the extra way his shoulders slumped, or the relaxation around the eyes.

There is just such a joyful variety to Jong-suk's acting and his keen differentiation of emotions. The vengeful anger of Park Soo-ha "I Hear Your Voice" had a quiet calculation lacking from the latent anger present in Go Nam-soon in "School 2013". It's a subtle distinction to make between two different kinds of anger, and Jong-suk can make it. It's also what makes all of his similarly written high school characters different. He can bring something new to each troubled youth he plays. He does not seem like Lee Jong-suk playing a role, but instead becomes Han Tae-seon ("Secret Garden"), Park Soo-ha ("I Hear Your Voice"), or Go Nam-soon ("School 2013").

Lee Jong-suk does equally well on the big screen and on the small screen. Some actors don't shift from film to television well, but Jong-suk has done so with finesse. Two of his most popular films, "NO-BREATH" and "The Face Reader" have him cast as students in two very different time periods. In both he is a serious student, good at what he does. In both he wants something different than what his father wants for him. Despite the similarities of character, Jong-suk manages to make them distinctly different aside from the inherent differences found in a sageuk and modern day sports drama. Woo-sang in "NO-BREATH" was reserved and competitive. The character required a lot of restraint. In contrast, Jin-hyeong from "The Face Reader" has a burning desire to learn and see the world. Jong-suk was much more subdued as Jin-hyeong, expressing much more with his face. As Woo-sang, he often kept his body riddled with tension.

Then there is that indefinable quality that many favorite actors have, the "it" factor. The thing that draws the eye even when in a room full of people. Lee Jong-suk has always had this "it" factor, but it was in "School 2013" that he was finally given the chance to fully utilize it as the lead. Even when the camera wasn't focused on him, he attracted attention. He convinced me that he was an achingly lonely high school boy with deep scars, dark secrets, and who did not value himself at all. The expression of his eyes ranged from empty to empathetic to full of uncontrollable rage. He smiled mockingly at the bullies, kindly at the bullied, and gratefully at his teachers.

I also have to give him credit for how he cries. It is easy to come off as hokey when crying on screen, and Lee Jong-suk is most definitely not hokey. He radiates raw emotion. As of 2013 he's been in leading man territory, which requires the ability to turn on convincing water works whether they be in full-blown tears or the more subtle misting and reddening of the eyes. Tears also require restriction in the throat that should be mimicked in stiffer line delivery - and it is. He, along with Kim Soo-hyeon, are two of my favorite male criers.

What gives Jong-suk part of his "it" factor is the variety in what he does with his art and the fact that he keeps growing and learning. He was blessed with the natural ability to act, and as he's matured and gained experience, he's expanded his repertoire. The quiet moments he is able to portray in "I Hear Your Voice" and in "Doctor Stranger" surpass his stellar previous works. He knows how to share intimate moments on camera, even if I have no idea how he does it.

Lee Jong-suk is an actor with a long road ahead of him. He's talented, versatile, handsome, and he translates well on any screen. People look forward to watching what magic he works on screen because he's a true Hallyu star, the full package. He's not just a pretty face and a winning smile. Luckily for us Korean drama watchers, we can find him currently starring in the medical romance mystery "Doctor Stranger" on SBS every Monday and Tuesday night. Since today is Monday, it's time for me to tune in.