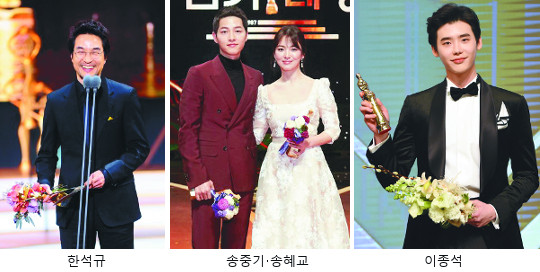 Actor Han Suk-kyu was awarded the Grand Prize at the SBS Drama Awards for the first time in 5 years.

The "2016 SAF SBS Drama Awards" was held on the 31st of December. Han Suk-kyu took home the Grand Prize for his performance in the current drama "Dr. Romantic". This is the first time in 5 years since his nomination for "Deep-rooted Tree" in 2011.

The Kim Sa-bu actor made a speech criticizing the Black List of culture on this day. He said, "I hear that actors have to be like white paper but one can't be a black one. Stars won't be able to shine without the darkness of night and the same way goes for actors. Cultural practitioners are people who think differently from others. If we accept the difference as a dangerous gaze, individuals, the society, or the nation cannot be harmonized".

The KBS Awards was up to everyone's expectations. The honorary Grand Prize at the KBS Drama Awards on the same day, went to the two leading actors of "Descendants of the Sun". Song Joong-ki said, "I was given the script when I was in the army and I thank those who trusted me back then. Thank you for making me shine". Song Hye-kyo said, "I am happy the drama was so successful, but I am ashamed about showing everyone my shortcomings as an actress".

"Han Suk-kyu receives Grand Prize from SBS after 5 years "
by HanCinema is licensed under a Creative Commons Attribution-Share Alike 3.0 Unported License.
Based on a work from this source