The connection between Han Hyo-joo and Lee Jong-suk has been revealed.

Stills and the network connection between Lee Jong-suk, Han Hyo-joo, Kim Eui-sung, Lee Si-eon, Lee Tae-hwan, Jung Yoo-jin and others were uploaded by the drama "W".

"W" is a romantic suspense drama about a beginner doctor Oh Yeon-joo (Han Hyo-joo) who gets sucked into the web-toon world and meets Kang Cheol (Lee Jong-suk). The drama deals with reality and fantasy at the same time.

The stills are of Oh Yeon-joo and Kang Cheol. Oh Yeon-joo is looking into her star web-toon artist father's computer which links to Park Soo-bong (Lee Si-eon), then Kang Cheol whose picture on hangs on a wall, then Seo Do-yoon (Lee Tae-hwan) and Yoon So-hee (Jung Yoo-jin).

Kang Cheol is a super rich boy who used to be a gold medalist in shooting. He is a web-toon character with a lot of fans and his relationship with Oh Yeon-joo revolves around Oh Seong-moo.

According to the production, Kang Cheol's character was thought of by Oh Yeon-joo's father who is the greatest web-toon artist in the country. 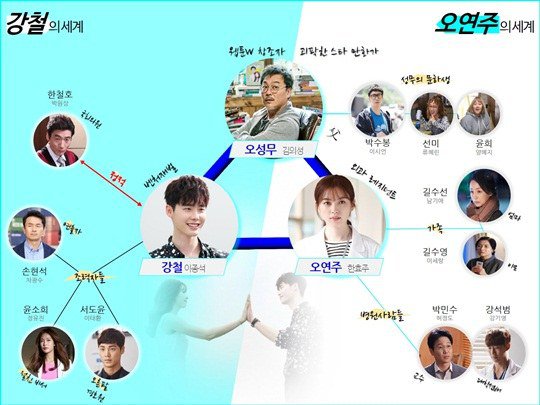 In the second picture, the characters are laid out in a map. Around Kang Cheol in his group of friends is Seo Do-young, a bodyguard who used to be a UFC fighter and Yoon So-hee, a sexy and smart young woman.

"Han Hyo-joo and Lee Jong-suk's connection in "W""
by HanCinema is licensed under a Creative Commons Attribution-Share Alike 3.0 Unported License.
Based on a work from this source