Ha Jung-woo in "The Terror Live" 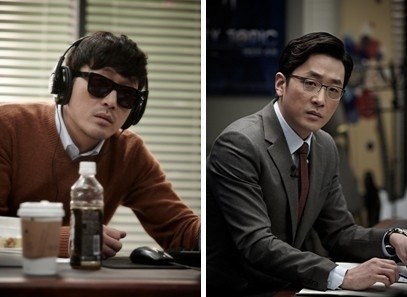 Two contrasting images of Ha Jung-woo from the movie "The Terror Live" have been revealed.

"The Terror Live" is about a news anchor broadcasting live on the situation of a terrorist bombing at the Han River. Ha Jung-woo takes on the role of Yoon Yeong-hwa, a former news anchor who was pushed out of the way and became a radio DJ due to an unfortunate incident.

The first picture shows the terror incident before it occurred and Ha Jung-woo has kept his cool. They next picture is after he witnesses the Mapo Bridge that he bombed and takes his chance to return as a news anchor by live broadcasting the phone call with the terrorist.

Expectations are high for this movie as Ha Jung-woo is about to demonstrate some extreme character change.

Meanwhile, "The Terror Live" will be released on the 1st of August.

"Ha Jung-woo in "The Terror Live" "
by HanCinema is licensed under a Creative Commons Attribution-Share Alike 3.0 Unported License.
Based on a work from this source