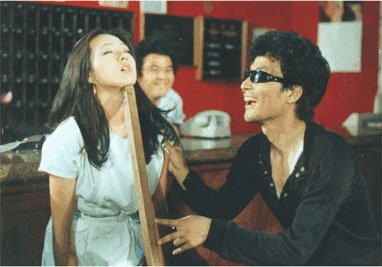 In an era (the 80's) where Korean national cinema was relegated to rapidly produced films whose sole purpose was to earn the quota in order to screen Hollywood movies, Lee Jang-ho's  effort stands out for its experimental nature and social critique, which eventually netted it the 9th (11th) place in the list with the 100 Best Korean Films of All Time, as comprised by the Korean Film Archive. The film received favorable reviews both domestically and internationally at the time, and was actually a box-office success.

The almost completely stripped of dialogue and quite surrealistic story revolves around Dong-cheol, a petty criminal who spends his time stealing and begging for money in the streets. After an encounter with a man who commits suicide by jumping from the top of a building, he spots a beautiful young woman, Hye-yeong, whom she perceives to be a college student, and proceeds on kidnapping her, ending in the taxi of Yook-deok. After a course where the "couple" mostly dreams asleep in the taxi, Hye-yeong is revealed to be a prostitute, and after beating both of the men in the woods, she makes them her "employees". The two do the errands for both her and a number of people in the profession for food, but after a fight with a customer they get kicked out. The story then continues with the three of them on a beach before it is concluded in a high-class restaurant in Seoul, where a marriage takes place, and all three of them, end up being a part of it. 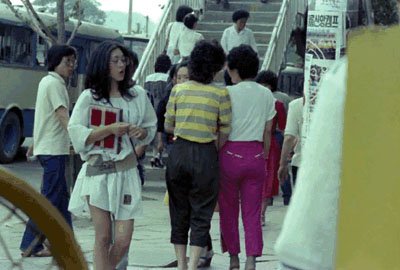 Lee Jang-ho directs a film whose experimental, surrealistic and Charlie Chaplin-inspired aesthetics are communicated to the spectator form the start, along with its subtle, but rather pointy social critique. In that fashion, the movie starts with a child, who spells its words, narrating the story, actually making the declaration of the fool Dong-cheol, as stated in the title. Subsequently, Dong-cheol witnesses a man jumping from a building, who turns out to be the director himself, in a scene that symbolizes the hopelessness filmmakers felt at the time due to the circumstances of the quota driven industry and the heavy censorship the government imposed. As in Charlie Chaplin's silent productions, the movie proceeds with a number of seemingly comic and occasionally surrealistic episodes, more like a collage of ideas than a compact story.

The social comments, however, are still here, dealing with the westernization of society, particularly in terms of entertainment and culture in general, unemployment, love, friendship, marriage and the hypocrisy of society, particularly of those that comprise the "high-class". This last aspect is depicted exceptionally in the wedding sequence, probably the most impressive in the whole movie, which is presented through a combination of surrealism, grotesqueness, and drama.

The main critique though, is addressed towards Chun Doo-hwan, a South Korean politician and former South Korean army general who served as the President of South Korea from 1979 to 1988 after a military coup, and particularly his 3S (Sex, Sports, Screen- in essence meaning beauty of appearance) Policy. Based on right-way Japanese activist Sejima Ryuzo's proposal, Chun tried to appeal to the citizens in order to ensure the success of the 1988 Seoul Olympics preparations. Chun rapidly enacted various measures to this end, forming a pro baseball and pro soccer team, starting the broadcast of color TV throughout the nation as a whole, lessening censorship on sexually suggestive dramas and movies, making school uniforms voluntary, and so forth. The three characters, all of which are social misfits, actually symbolize this Policy in mocking fashion, since the group is comprised of a prostitute (Hye-yeong/sex), a disabled person (Dong-cheol/sports) and a fat man (Yook-deok/screen). Through this approach, Dong-cheol managed to avoid censorship (which, otherwise, would never have allowed a film like that to screen at the time) and at the same time, to produce a highly artistic movie.

The acting is also on a very high level, in perfect resonance with the film's aesthetics. Kim Myung-gon is exceptional as Dong-cheol, highlighting the fact that he is an idiot, with gusto and artistry. The scenes with the kidnapping (much reminiscent of Kim Ki-duk's "Bad Guy") and the one where he takes a bath in his clothes are the highlights of a great performance. Lee Bo-hee is also great as Hye-yeong, highlighting her disillusioned but also sensitive and in-love character quite nicely.  Lee Hie-seong as the third-wheel Yook-deok is also great, with the scene in the beach where he is being beaten being his highlight. The chemistry of the three is impervious, and one of the film's greatest aspects. 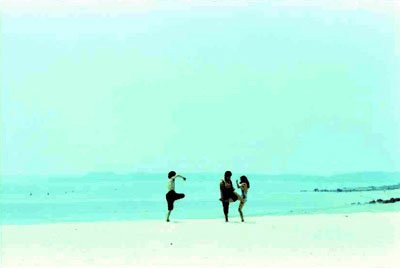 Seo Jeong-min's cinematography highlights the different settings with a combination of realism and nostalgia, with his prowess being evident in all the different settings, although the beach and the wedding is where he is at his best. Kim Hui-su's editing implements the silent-movie aesthetics quite nicely, as he uses slow motion and fast-forward according to the occasion, with the latter inducing the movie with a sense of speed that intensifies the entertainment aspect, despite the fact that the pace is relatively slow.

"Declaration of Fools" is a great film, filled with context and artistry, and a great start for someone who wants to witness where the style of Lee Chang-dong, Park Kwang-soo, and Kim Ki-duk's style emerged.