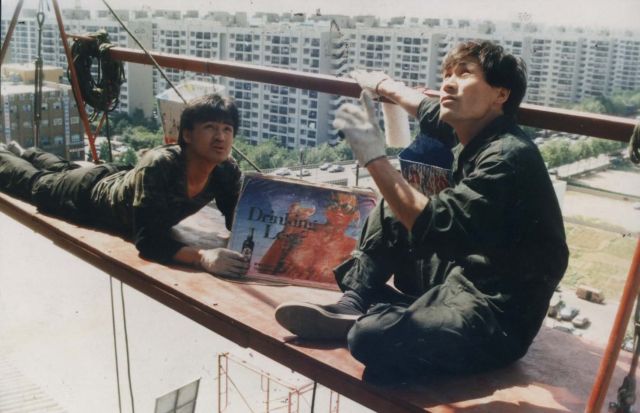 If one was to look for the direct roots of contemporary Korean, one should not look much further than Park Kwang-soo's debut, a wonderful sociopolitical allegory based on a rather unusual friendship between two men.

1988 was the year of the Seoul Olympics, and a time of great political and social change for South Korea. Massive street protests against the military government and on behalf of workers' rights had recently reached their peak. However, the Korean society portrayed through cinema in those days little resembled the passions on display in the street. Government censors, wielding an iron grip over the film industry, ensured that the slightest hint of social criticism was clipped in the screenplay or in the editing room before reaching audiences.

"Chilsu and Mansu", released on November 16, 1988 is a frequently-cited landmark on Korea's path from restrictive censorship to a greater freedom of expression. It is based on a story by Taiwanese writer Huang Chunming, whose writings were banned in Korea at the time (hence his name does not appear in the credits).( source: koreanfilm.org)

The film revolves around two men; Chil-su, who works as a billboard painter and Man-su, who paints buildings by rappelling. The two of them meet when Chil-su's boss hires Man-su, and soon enough, they become friends, particularly due to the former's insistence, which actually borders on stalking. The same tactics (stalking that is) lead Chil-su to meet Ji-na during a civil defense drill (which was quite common at the time), a college student and part-time Burger King worker. Chil-su falls in love with her, and tries to lie her way into her heart, using English, which the girl studies, and at the same time forces himself to Man-su's house, while the two start working together, since Man-su does not seem to bother by neither his roommates overstepping neither his constant lying. 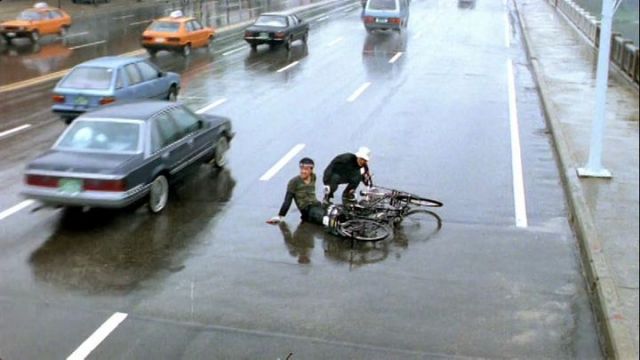 Gradually, we learn about the protagonists' family issues that have led them to solitude. Man-su's father is a political prisoner, which has cost him any kind of progress in his own life, while Chil-su's sister is disowned for sleeping with American soldiers, while his father is a drunk who leeches off his new wife. In the end, and as their lives seem to be getting worse as time passes, the film takes a rather dramatic turn, after the two of them are assigned the painting of a billboard.

Park Kwang-soo directs a film that uses an unlikely base, since the way the two become friends borders on the surrealistic (one can easily see the impact the film had on Kim Ki-duk's "Bad Guy") in order to present a number of sociopolitical comments about the era, which become much more intense as the story progresses.

In that fashion, initially the film deals with the turning of the Koreans towards western civilization and particularly the US (English language, movies, clothes, video games, music, and almost every aspect of the then American pop culture), and the newly realized social inequality and worker's rights, as expressed in the scene where Man-su quits. As the story progresses though, the comments become more "serious" and intense, regarding the practices of the then regime towards political dissidents, which even extends to their children, as we witness in Man-su's life story. The impact of the US is represented by Chil-su's life , regarding both his family's story and his will to move to Miami. 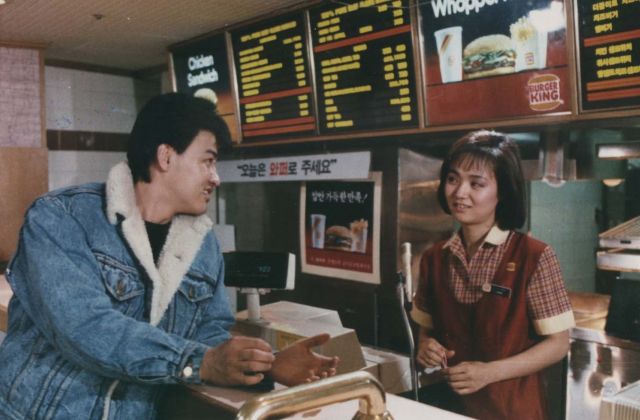 The finale provides the most intense ones, in metaphorical fashion. The members of the labor class have no voice, but even when they decide to express it, all hell breaks loose, with the authorities treating any kind of similar action as revolutionary. During the scene in the billboard, the two men find themselves, successively, "against" the police, politicians, the capital (their boss actually) and the press, all of which are portrayed as being against the working class the two represent, particularly because they cannot hear or understand them. The above are presented in a wonderful fashion through Park's direction, who highlights his comments through a rather entertaining, although quite dramatic approach.

At the same time, Park does not fail to analyze his characters to the fullest, as their attitude is "justified" by their effort to cope with their families' issues. Chil-su tells lies to others and himself constantly, and Man-su has isolated himself and has turned to alcohol. The unlikely way their friendship occurs is also an indication that their kind of solitude is quite difficult to end in reality. Their portrayal is benefitted the most by Park Joong-hoon (Chil-su) and Ahn Sung-ki (Man-su) who portray their characters with gusto and realism in outstanding fashion, while they highlight their chemistry.

Yooo Young-gil's cinematography follows the realistic paths of the movie's aesthetics, with him presenting a number of different locations (fast food shops, video game parlors, malls, and Man-su's rundown house, etc) with accuracy. His work, however, finds its apogee in the panoramic shots of the finale. Kim Hyeon-I's editing allows the movie to move forward constantly, in a pace that is relatively fast, and suits the narrative quite well.

"Chilsu and Mansu" is a great film, both as an artistic endeavor and due to its significance for Korean cinema.

Available on Blu-ray from YESASIA