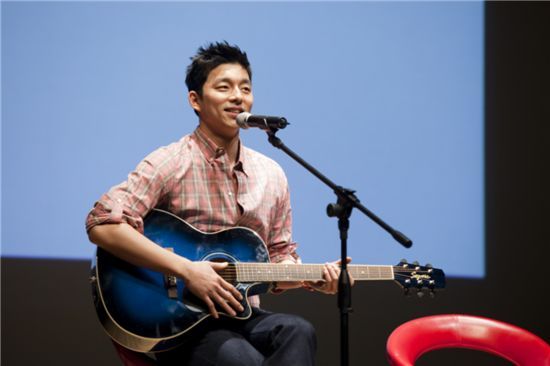 Korean actor Gong Yoo successfully wrapped up a fan meeting which is his first since being discharged from the military last month, according to his agency N.O.A. Entertainment

The actor met with some 1,000 fans -- including those from Japan, Hong Kong, New Zealand and Taiwan -- at the fan meeting , which was held at Seoul's Yonsei University on January 10.

The event, titled "694 Days of Waiting for Gong Yoo", was hosted by Korean comedians Hong Seung-mok and Yang Se-hyung. Gong performed several songs for the fans including "Like A Child", "What A Relief" and "Nothing Better" with singer Jung Yeop.

"I had trouble sleeping yesterday (Jan. 9) because I was so excited and nervous", the 30-year-old actor was quoted as saying. "I will do my best with all the passion and energy I have to not let down my fans who have been waiting for me for two years".

Gong Yoo, whose real name is Gong Ji-cheol, debuted in 2001 in the KBS TV series "School 4". He has appeared in more than a dozen television dramas and films, including the 2003 film "My Tutor Friend" alongside Hallyu stars kwon Sang-woo and Kim Ha-neul.

He became a household name throughout Asia after starring in the 2007 hit TV series "Coffee Prince" with actress Yoon Eun-hye.

"Gong Yoo wraps up first fan meeting since military discharge"
by HanCinema is licensed under a Creative Commons Attribution-Share Alike 3.0 Unported License.
Based on a work from this source