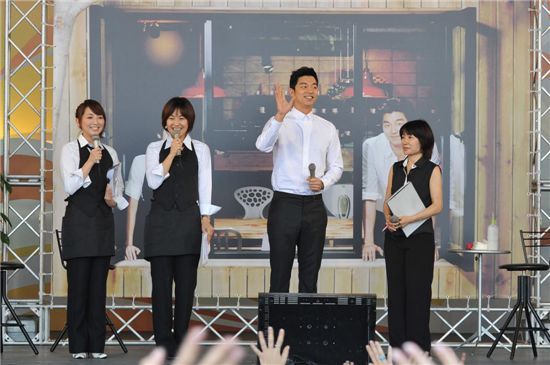 Korean actor Gong Yoo at the "Coffee Prince 1.5th Shop IN United States of Odaiba" at Odaiba in Tokyo on August 22. [N.O.A Entertainment]

Korean actor Gong Yoo held a promotional event in Japan for hit TV series "Coffee Prince" over the weekend, according to his agency N.O.A Entertainment on Monday.

N.O.A announced that the actor met with about 5,000 fans for the drama event held by Fuji TV called "Coffee Prince 1.5th Shop IN United States of Odaiba" at Odaiba in Tokyo on August 22.

He performed song "I Love You" by veteran singer Han Dong-jun, spoke about filming the show and acted out his love confession scene from the drama with a fan.

An official from N.O.A explained that Gong Yoo's fan base increased after the drama's showing in Japan, with more male fans and those in their 10s and 20s in particular.

"I want to sincerely thank all the Japanese fans who came to the fan meeting. I am extremely happy that we were able to spend this time together even under the hot weather", Gong Yoo was quoted as saying, adding that he is glad that it was a great opportunity to reignite people's interest in "Coffee Prince".

The actor will be returning to Korea tomorrow after his appearances on Fuji TV's live variety program "Warrate Iitomo!" and on radio talk shows Mnet Japan, BS Broadcast and Rainbow FM.

"Coffee Prince", which first aired in Korea three years ago, made its premiere in Japan on August 11 as part of Fuji TV's "Hallyu Alpha Summer Festival". The broadcaster is scheduled to air the drama "One Fine Day" in October which also stars Gong Yoo.

Born Gong Ji-cheol, Gong Yoo made his debut with a role in KBS' TV series "School 4" in 2001. He appeared in more than a handful of dramas and films including "My Tutor Friend", "S Diary" and "She's on Duty".

He rose to fame throughout Asia as the male lead in the SBS' drama "Hello My Teacher" (2005) and in "Coffee Prince" with actress Yoon Eun-hye. 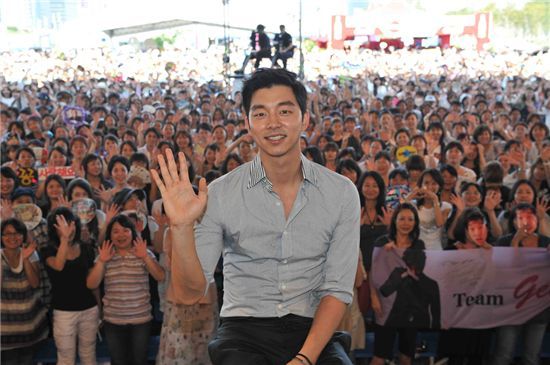 Korean actor Gong Yoo at the "Coffee Prince 1.5th Shop IN United States of Odaiba" at Odaiba in Tokyo on August 22 with about 5,000 fans. [N.O.A Entertainment]

"Gong Yoo meets with 5,000 fans during drama promotion"
by HanCinema is licensed under a Creative Commons Attribution-Share Alike 3.0 Unported License.
Based on a work from this source