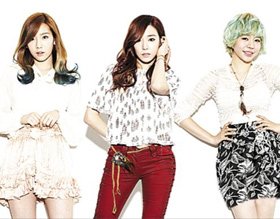 From left, Tae-yeon, Tiffany and Sunny

Sunny, Tae-yeon and Tiffany of Girls' Generation will sing Korea's national anthem and make a ceremonial first pitch when the Los Angeles Dodgers meet the Cincinnati Reds at Dodger Stadium on July 28.

This comes as part of an event called "Korea Week", which is being hosted by the Korea Tourism Organization in Los Angeles in cooperation with the Dodgers to capitalize on the success and popularity of pitcher Ryu Hyun-jin and Reds' hitter Choo Shin-soo.

Various activities will take place inside and outside of Dodgers Stadium between July 25 and 28, when the two teams will play each other four times.

The appearance by members of the girl group will wrap things up on July 28, which the KTO is dubbing "Korea Day". Audiences will also be treated to Korea-themed performances and Taekwondo demonstrations. After the game, Ryu and Girls' Generation will be appointed as promotional ambassadors by the KTO.

This is not their first appearance at the stadium. Tiffany threw a ceremonial first pitch for the Dodgers in early May ahead of a game against the Arizona Diamondbacks.

"Girls' Generation to Sing National Anthem at Dodgers Stadium"
by HanCinema is licensed under a Creative Commons Attribution-Share Alike 3.0 Unported License.
Based on a work from this source