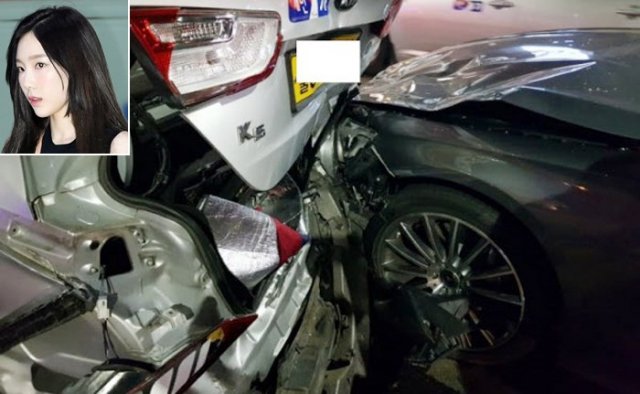 Tae-yeon's car (right) is crushed after a collision with a taxi in Nonheyon-dong, Seoul on Wednesday, in this picture provided by a reader.

The star was driving her Mercedes-Benz in Nonhyeon-dong, southern Seoul. Witnesses said she crashed into the rear of a taxi in front of her, and the shock sent the taxi bumping into an Audi in front.

Tae-yeon boarded an ambulance, which arrived about 10 minutes later, complaining of chest pain.

The front of her car was seriously damaged, the rear of the taxi shattered, and the Audi's right rear side damaged.

The Audi driver and two taxi passengers were also taken to a hospital.

Police said Tae-yeon did not appear to be driving under the influence of alcohol but caused the accident by careless driving.

"Girls' Generation's Tae-yeon in 3-Way Car Crash"
by HanCinema is licensed under a Creative Commons Attribution-Share Alike 3.0 Unported License.
Based on a work from this source