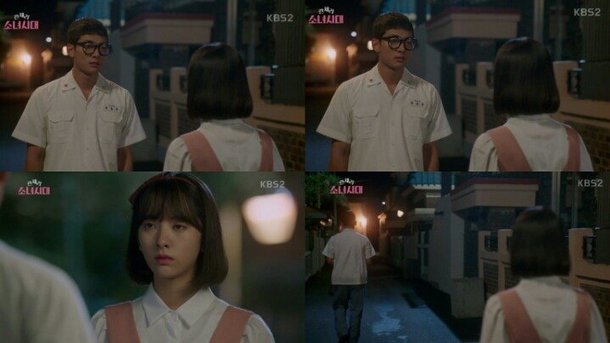 On the latest episode of the KBS 2TV drama "Girls' Generation 1979", Jeong-hee (Bona) was mean to Dong-moon (Seo Young-joo) and who decided not to like her anymore.

Jeong-hee went to watch a movie with Son Jin who was there to meet Hye-joo (Chae Seo-jin). After the movie, they met Dong-moon at a restaurant.

Son Jin told Jeong-hee that Dong-moon was the top of his school, which surprised and Jeong-hee. Son Jin got up first and let them finish eating together. Jeong-hee blamed Dong-moon for the situation. When he followed her home to make sure she was safe, she told him, "Don't follow me. You're annoying".

Dong-moon said, "I am tired of following you around when you don't even look at me. I'm not going to like you anymore. I'm sorry", and walked away.

Meanwhile, Jeong-hee was worried that Dong-moon was upset because of her.

""Girls' Generation 1979" Bona tells Seo Young-joo that he's annoying"
by HanCinema is licensed under a Creative Commons Attribution-Share Alike 3.0 Unported License.
Based on a work from this source