Genre Dramas Battle It Out in July 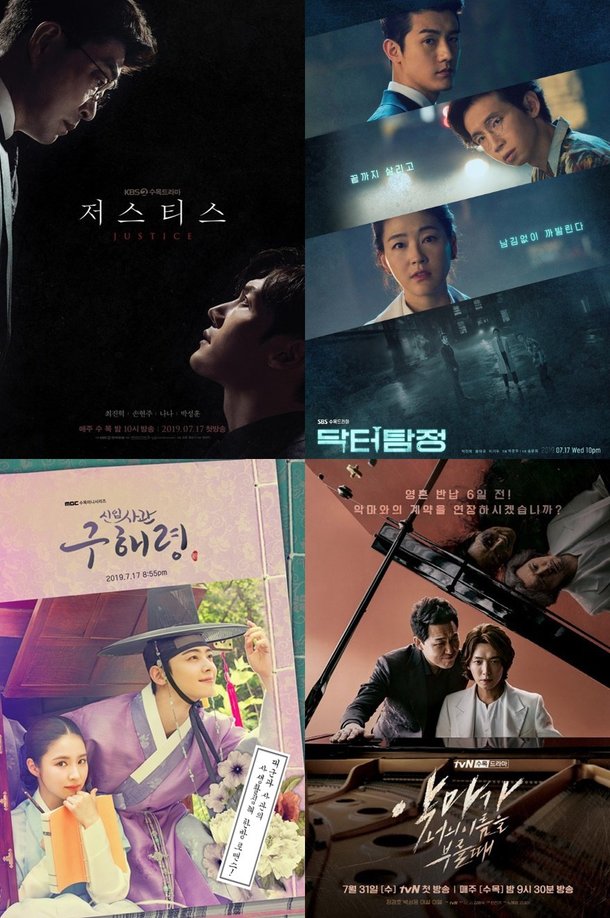 The competition is about to get fierce with Wednesday / Thursday dramas. MBC drama "One Spring Night" and KBS2 drama "Angel's Last Mission: Love" are struggling for first place at the moment, but dramas of various genres are making a grand entrance this July.

First is the new KBS2 drama "Justice" starting this 17th. "Justice" is a social thriller about Lee Tae-kyeong (Choi Jin-hyuk), a corrupt lawyer who has joined hands with the devil for revenge, Song Woo-yong (Son Hyun-joo), a man who chose to become evil for the sake of his family, and reveals the dark underbelly of Korea's VVIPs.

The SBS drama "Doctor Detective" comes out on the same day. It is a mystery investigative drama about resolving social injustice. It is produced by social affairs TV show producer Park Joon-woo, who makes the drama appear more real and detailed.

The cast is made up of Park Jin-hee, Bong Tae-gyu and Lee Ki-woo. Park Jin-hee plays a doctor detective who is achromatic and flawless and does not show mercy. Bong Tae-gyu is a maverick, very flexible and nimble, while Lee Ki-woo is a chaebol who wields absolute power.

MBC's newest, "Rookie Historian Goo Hae-ryung" is also starting on the 17th. The drama begins with the question, "What if there was a female librarian in the Joseon times?" Hae-ryung fights prejudice and encourages a change in the outdated system. Along with the fight of the women palace historians, the drama will tell of her romance with the prince who has a secret of his own.

"Rookie Historian Goo Hae-ryung" stars Shin Se-kyung as Goo Hae-ryung and Cha Eun-woo as prince Yi Rim. Shin Se-kyung has a history of sageuks, such as "Six Flying Dragons" and "Deep Rooted Tree", so her performance is highly expected, while Cha Eun-woo is expected to portray a prince who is clumsy in everything he does in his disconnected world.

"When the Devil Calls Your Name" begins on the 31st. Jung Kyung-ho and Park Sung-woong from "Life on Mars" come back together for this drama, which is a comic fantasy drama about a star song writer named Harib selling his soul to the Devil and playing the game of his life with the end of his contract coming up. The classic "Faust" is the motif of this drama.

"Genre Dramas Battle It Out in July"
by HanCinema is licensed under a Creative Commons Attribution-Share Alike 3.0 Unported License.
Based on a work from this source