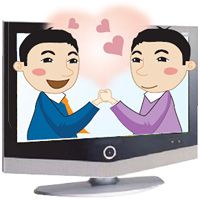 Korean society seems much more tolerant about homosexuality these days. But what about a gay kissing scene on a prime time TV drama? That may be too much for at least some religious groups in this society where Confucian values are still dominant.

Nevertheless, homosexuality is no longer taboo as a soap opera theme. It's emerging as a popular topic, raising the eyebrows of some religious groups.

Conservative Christian groups argue that it is inappropriate for terrestrial broadcasters to air TV dramas featuring gay love, insisting it negatively influences the "sacred" institution of marriage between men and women.

However, progressive religious organizations say that now is the time for Korea to openly discuss the controversial issue and find ways of properly protecting homosexuals and other social minorities.

SBS, one of Korea's major broadcasters, is currently airing a soap opera, titled "Life is Beautiful" on Saturdays and Sundays, which deals with love between two gay men, and their conflicts with family members and friends. Its viewer ratings exceeded 20 percent on May 23 when the two came out of the closet, pointing to Koreans' growing interests in the once-social taboo.

MBC also aired a drama, titled "Personal Taste", featuring a man who pretended to be a gay in order to live together with a woman he is in love with.

With more soap operas and other entertainment programs shedding light on homosexuality, conservative religious groups have begun stepping up on criticism against what they call the "glamorization of gays and lesbians" by TV program producers seeking to draw a larger viewership.

"Everybody knows that homosexual relationships are 'not a social norm'. A family should be made up of a man and a woman, with children being born and raised by a father and a mother. It is what the mighty God intended for humans".

The organization then said it is not right for the society to generalize and approve homosexuality, stressing that a series of recent TV programs have overly beautified gays and homosexual love, negatively affecting the acceptable growth of adolescent sexuality.

"The problem with soap operas featuring gays is that homosexuality concerns only a small number of individuals. Most of us have nothing to do with it", KACC spokesman Shim Man-sup said. "Gays can pursue their own lifestyle privately. But when homosexuality is highlighted and glamorized by TV programs, it not a private matter anymore. Broadcasters must stop commercially exploiting the issue for the common good".

Another conservative Christian group, Esther Prayer Movement, sent an email message to its members early this week, saying if TV programs continue to feature gays as they do now, many adolescents may be misinformed about homosexuality.

It urged members to send protest emails and make complaining phone calls to broadcasters, and if necessary, to stage a boycott campaign against them.

In contrast, progressive religious groups say that the recent emergence of homosexuality should serve as a chance for Korean society to pay more attention to the welfare of social minorities and discuss how to better protect their rights.

"We do not hold a particular stance on this controversial issue. But we believe that everybody is equal before God and gays should not be discriminated against for their sexual preference", said Ching Yong-taek, spokesman for the Christian Institute for the 3rd Era. "Their rights should be protected in a more institutionalized manner. We will take a range of measures to further publicize the issue".

The group plans to hold a forum under the theme of "Beyond Hatred of Homosexuality" in Seoul on June 7, inviting a number of liberal-minded theologians from home and abroad in a bid to inform more Christians of homosexuality in the context of the Bible.

"Gay drama raises religious groups' eyebrows"
by HanCinema is licensed under a Creative Commons Attribution-Share Alike 3.0 Unported License.
Based on a work from this source