From eccentric to darling of Venice 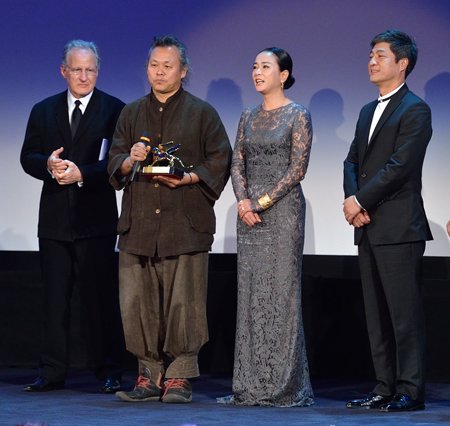 Director Kim Ki-duk, second from left, and actress Jo Min-soo, third from left, pose after winning the Golden Lion for Best Film for his film "Pieta"at the awarding ceremony of the 69th Venice Film Festival in Venice, Italy, Saturday. / Xinhua-Yonhap

While the world more readily acknowledged and embraced Kim Ki-duk as an auteur director, he has been received in a mixed fashion in Korea.

But with his 18th feature film "Pieta" having grabbed the Golden Lion Prize at the 69th Venice Film Festival, the 51-year-old Kim has reaffirmed his art to the world and the Korean public as a first-rate director who has won the top prize at three international film festivals of Venice, Cannes and Berlin.

His eccentricities include not owning a cell phone, dressing down in worn-out shoes or bare foot on the red carpet, and singing the Korean folk song "Arirang" after winning the Golden Lion. But "Pieta", a morality tale about an enforcer for a loan shark and his supposed mother, found resonance in Venice.

"Capitalism is a major topic of concern everywhere in the world. I think the judges and audience felt strongly about immorality that has come from capitalism. The movie begins with cruelty and violence but it eventually moved them with scenes that purify the mind through inner forgiveness and salvation", Kim said. 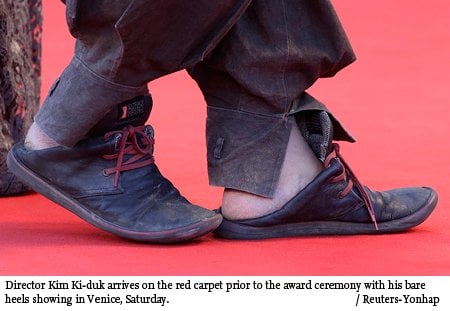 In "Pieta", the level of explicit violence is toned down compared to previous films that earned him the epithet of being a notorious filmmaker, an intentional attempt Kim made to appeal to a larger audience.

The veteran director has been more engaging recently, appearing on a popular entertainment program in which he described himself as a "monster who grew up with an inferiority complex" due to underprivileged surroundings; he acquired his art through self-learning and only received a middle school education.

Born in Bonghwa, North Gyeongsang Province, Kim grew up in a difficult home environment. He had no other choice than to go to a local agricultural high school that was not officially recognized as an educational institution.

After graduating, the director attempted to acquire a lot of different skills by working in the Guro Industrial Complex and Cheonggye district in Seoul. He started to work in a factory located near the then covered stream at the age of 15 and also became a manual laborer in the worn-down industrial complex. This kind of workshop was starkly portrayed in "Pieta".

During his time in France, the two movies, "The Silence of the Lambs" and "Les Amants du Pont Neuf", altered the path of his whole life; he decided to become a film director. His directorial debut work "Crocodile" received sensational reviews with the tale of a man living on the edge of the Han River in Seoul who saves a woman trying to commit suicide.

"I always concentrate on respecting people and their lives and the meaning within their lives, and I believe that is something people around the world can appreciate", Kim was quoted as saying by AFP on Saturday.

The director produced this third work "Birdcage Inn" in 1998 which was chosen as the opener at the Berlin International Film Festival in 1999. His next movie "The Isle", the first to receive wider international acclaim for his recognizable style, was selected to vie for the Golden Lion in Venice in 2000. The film also won the World Cinema Competition at the Sundance Film Festival.

"Real Fiction", which was shot in 2000 entirely in real-time with no retakes, was also chosen to vie for the competition category of the Moscow International Film Festival in 2001.

The film "Bad Guy", a minor box office hit in Korea, attracted an audience of over 700,000. This controversial film, a portrayal of sexual slavery and gangsters, is about a man who traps a woman into prostitution and becomes protective of her. It was once again presented in the competition category of the German film festival.

Asked why he sang the Korean folk song "Arirang" at the awards ceremony, the director said through an email interview that the distribution company released Sunday. "I wanted to tell the international audience something about my country while conveying the message that the film Pieta gives", Kim said that his 2011 self-documentary "ARIRANG - Movie" was an answer to his questions about people, and a ritual that cleansed his soul. He made the film after a three-year hiatus from filmmaking during which he lived in a hut in a farming village. It won a prize in the "Un Certain Regard" category at the Cannes Film Festival.

"I will do my best to keep up the good work in the future. I hope many people go to see the movie that was released in my country a few days ago", Kim said.

"From eccentric to darling of Venice"
by HanCinema is licensed under a Creative Commons Attribution-Share Alike 3.0 Unported License.
Based on a work from this source