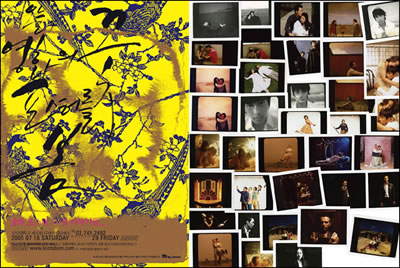 One of the quickest ways to find out what a film is about is to look at its promotional poster.

A good poster should provide basic information about the movie as well as catch people's attention.

But as the competition between films gets fiercer, a variety of creative film posters with interesting and clever ideas have been generated so that the posters themselves have become an art form.

An exhibition in Seoul shows famous films' posters and other visual materials used for the promotion of movies that were made by a local design company in the past 10 years. Titled "Today, Movie Posters Are the Flowers of Films", the exhibition runs through July 29 at the Zero One Design Center in Taehangno, northern Seoul.

"You might think that making promotional posters is simple", said Kim Hye-jin, creative director and CEO of design company Kkotsbom, which organized the exhibition. "But to make a movie poster, our work starts from the very beginning before the shooting starts".

Since a film poster should contain the film's core theme, designers read the movie script and try to find an effective way to express it with an eye-catching design. The poster design is then extended to other promotional purposes such as advertisements in papers, leaflets and press kits, Kim added.

The exhibition displays about 30 representative film posters by Kkotsbom, such as "Bad Guy", "Peppermint Candy", "Failan" and "Il Mare", and also shows other visual materials, such as unreleased initial designs, initial photos for posters, leaflets and original sound track CD covers to offer visitors glimpses of how poster design are created.

In 1995, Kim founded the company with her colleagues from her university where they had majored in visual communication design. Since their first poster for "Peppermint Candy" in 1999, the company has worked for about 50 local films.

"Of course, the most important thing is to make people want to know about the film and want to see it when they see a poster, but posters should also have their own distinguishing styles, which we find really hard", Kim said.

She chooses the main poster of "Die Bad" as one of most memorable works as she experimented using calligraphy in the poster for the first time. It received a positive review because it demonstrated the film's strong theme.

But the uses of experimental or strong images in film posters sometimes stirs controversy as there are certain restrictions on them, or directors simply don't like them, Kim said.

The Korean Media Ratings Board censored a promotional poster of "Mongjonggi 2 (Wets Dream 2)", a film about high school girls' sexual desire as the poster's image and writing were too suggestive to be seen in public spaces although the movie received the 15-and-over rating.

"As it is true that the marketing of a film starts from a poster, we are very sensitive about reviews of our posters as we feel the commercial success of the film depends on our poster", Kim said.

But she attributes the growth of her company to the commercial success of local films at home and abroad in the past 10 years.

"These days, almost every film has international posters because international sales are on the increase, demonstrating the success of local films. And I heard that people buy local horror films in film markets after seeing the posters", Kim said.

As the exhibition also aims to celebrate the 10th anniversary of the company, seminars will be held in which participants can talk to film marketers, movie poster photographers and advertisement designers.

Where: Zero One Design Center in Taehangno, Seoul

"Famous Movie Posters on Display"
by HanCinema is licensed under a Creative Commons Attribution-Share Alike 3.0 Unported License.
Based on a work from this source