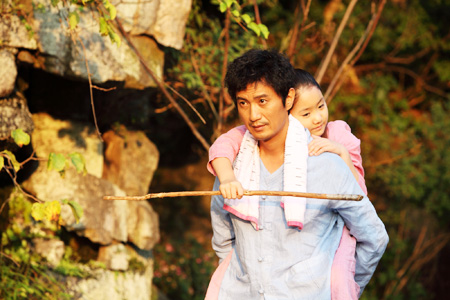 Actors Ahn Nae-sang, front, and Jin Ji-hee appear in a scene from the film "The Cane". / Courtesy of Lotte Entertainment

The "hoichori", or cane traditionally used to reprimand children, is said to bruise not only kids' calves but also the tender hearts of the parents or teacher.

In the most extreme cases, adults would roll up their pants and have the child whip them, reasoning that their shortcomings in parenting or teaching are to blame.

The new film "The Cane" imagines that a Joseon-style "hakdang" (village school) still exists deep in the woods of Gangwon Province, where a precocious child serves as one of the hoichori-whipping teachers. The school doubles as a sort of boot camp for social misfits, and among new disciples is the girl's own father, with whom she was separated at birth.

One might naturally expect a bickering and bonding story that highlights filial piety and the importance of family, featuring tearjerking scenes in which the girl canes her own father.

Writer-director Park Kwang-woo, however, resorts to cliched melodramatic formulas and unwarranted violence to force a reaction from viewers.

If this reporter had children, she would make sure they stay far away from this deceiving "family" movie.

Song-i (sitcom star Jin Ji-hee) is the only daughter of the hakdang master. Though only 12, she is a respected teacher who is well versed in Confucian classics and displays a charismatic sense of authority. The film makes some attempt to show how she's still a fragile child that misses her late mother, but her father abruptly reveals that she's actually adopted. Talk about sensitivity!

But Song-i doesn't have much time to digest this shocking revelation, because it turns out that one of the newly admitted troublemakers she must train is her birth father.

She's less than thrilled to meet Du-yeol (Ahn Nae-sang), a former boxing champion who's led a rough life after losing his wife and suffering an injury. Having been in a coma, he discovers too late that his wife had given birth to a baby before her passing. He laments for the child, whom he believes was adopted overseas, and regrets that he would have led a better life had he known he was a dad.

Nevertheless the guy shows no sign of trying to correct his ways.

The first half of the film drags on to show how shamefully horrible he is to Song-i until he finds out that she's his long-lost daughter, as if suggesting that basic propriety and warmth is dispensable between strangers.

The one-dimensional script fails to make the so-called father-daughter conflict intriguing in any way. It goes something like this: Du-yeol starts smoking and spitting, and resorts to verbal and physical aggression when he can't stand "a little minion" trying to teach him a lesson. The little girl on the other hand starts yelling orders at the top of her lungs until she ends up throwing temper tantrums. The point here seems to be that the two are undoubtedly related given their propensity for violence.

But the most laughable part about the film is that employs deus ex machina to move things forward. The director brings in gangsters to stir things up - a bad habit among Korean cineastes that seemed to have disappeared as of late - and this reporter felt seriously worried about the welfare of the child actress. The "High Kick Through The Roof" star also had to brave scenes that involved running in heavy rain and falling into a pond.

We have seen hardboiled action flicks starring children like "The Man From Nowhere" but that was an R-rated film. The Berlin Film Festival's youth section sometimes invites children to watch mature, explicit movies, but this is for the purpose of challenging young minds and provoking discourse.

"The Cane", however, is supposed to be a family movie, and the gratuitous acts of violence by not only mean gangsters but also ordinary adults defies the purpose of the genre.

Opens in theaters May 19. Rated 12 and over. Runs 104 minutes. Distributed by Lotte Entertainment.

"Family film tainted by violence"
by HanCinema is licensed under a Creative Commons Attribution-Share Alike 3.0 Unported License.
Based on a work from this source