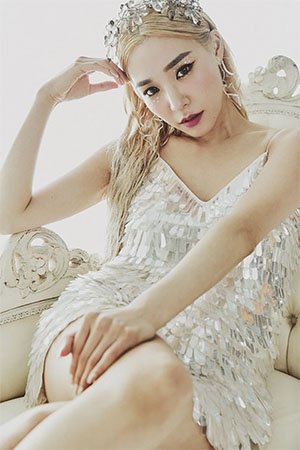 Tiffany, a former member of girl group Girls' Generation, is set to release her first album under her new stage name of Tiffany Young in the U.S.

The album, "Lips on Lips", is about to be available on online music-streaming sites on Friday.

"All five tracks on the album are about self-discovery and personal growth", her management agency said in a press release.

To promote the album, Tiffany will embark on a North American tour next month, starting with a show in Toronto. She will then perform in Chicago, Los Angeles, Minneapolis, New York, Seattle and Vancouver.

Meanwhile, she has been nominated for this year's iHeartRadio Music Awards in the Best Solo Breakout category among female singers, with winners to be decided based on votes from fans and announced on March 14.

"Ex-Girls' Generation Star Set to Release 1st Album in U.S."
by HanCinema is licensed under a Creative Commons Attribution-Share Alike 3.0 Unported License.
Based on a work from this source