"Dragon" soars to the top of box office 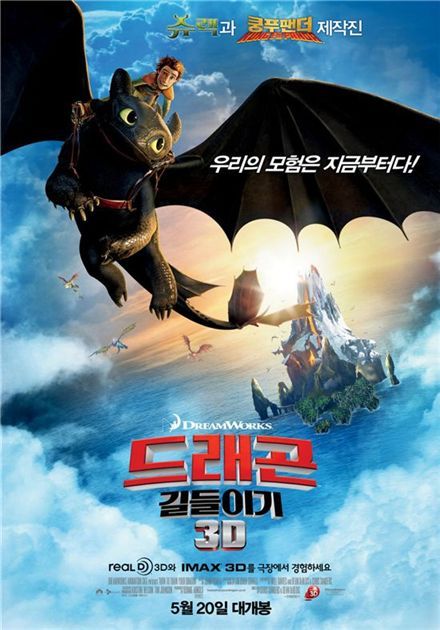 Hollywood animated picture "How To Train Your Dragon" [DreamWorks Pictures]

Hollywood animated picture "How To Train Your Dragon" bowed into first place on the local box office over the weekend, pushing former winner "The Housemaid - 2010" off the top spot.

Figures by the Korean Box Office System (KOBIS) released on Monday revealed that the latest DreamWorks film, which opened in theaters on May 20, attracted 759,590 moviegoers during the weekend of May 21 to 23.

"Dragon", based on the novel by Cressida Cowell, is about a young Viking boy who wants to become a dragon hunter but instead becomes friends with one of the creatures. The animated movie is voiced by actors Jay Baruchel, Gerard Butler and Craig Ferguson.

Other movies on the top 10 include "A Nightmare on Elm Street", "Republic of Korea 1%" "Poetry", "Blades of Blood" and "Bestseller".

""Dragon" soars to the top of box office"
by HanCinema is licensed under a Creative Commons Attribution-Share Alike 3.0 Unported License.
Based on a work from this source