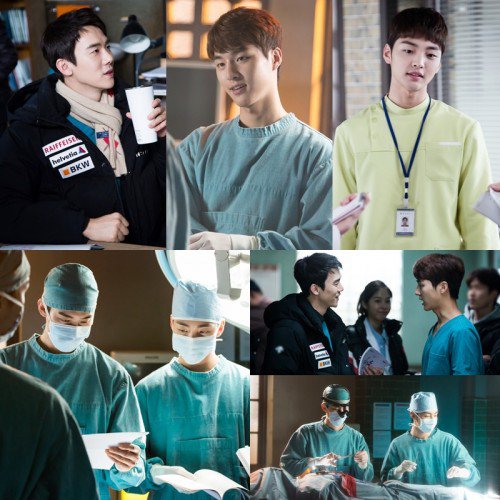 Despite Yoo Yeon-seok's 'cold' fashion in a gown and surgical mask, his face is filled with a smile.

Yang Se-jong is talking with his fellow actors during break and shows a whole new side of himself unlike the icy character in the drama. Nurse Kim Min-jae seems to be in a daze at one corner of the set.

Yoo Yeon-seok and Yang Se-jong were about to film the scene where they fight with each other after coming out of the surgical room.

The two started rehearsing prior to the actual shoot. They built up tension before the cameras started rolling and no one dared breathe around them. However, as soon as they finished their lines, they bursted out laughing.

Yoo Yeon-seok and Kim Min-jae performed many scenes where the doctor and the nurse went into a surgical room together.

They focused on their lines and pretended to act the parts before actually doing it. Their synergy was outstanding.

"Dr. Romantic" can be seen every Monday and Tuesday at 10PM.

""Dr. Romantic" Yoo Yeon-seok, Yang Se-jong and Kim Min-jae-I's chemistry"
by HanCinema is licensed under a Creative Commons Attribution-Share Alike 3.0 Unported License.
Based on a work from this source