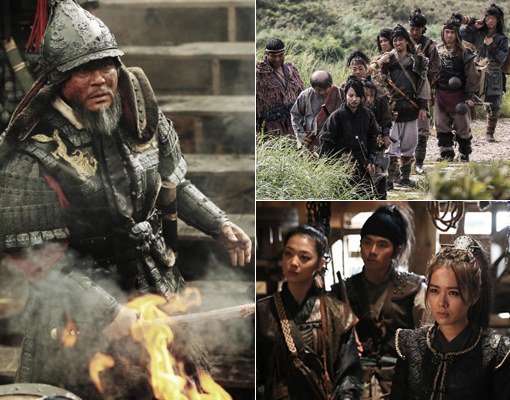 Three major blockbusters worth the cost of 10 billion won are in a predicament. Release dates are being reconsidered due to the Sewol ferry disaster which put the whole country in grief.

They are "Roaring Currents" during the Japanese invasion of Korea, "Pirates" and "Haemoo" which is about an incident on a ship full of Korean immigrants from China.

Their release dates were decided a year ago. However, all of them deal with the sea and vessels, battles and riots. The producers are all thinking deeply now.

"Roaring Currents" was slated for release on the 30th of July and "Pirates" in August. The two of them are major blockbusters supported by CJ Entertainment and Lotte Entertainment being aimed for the dead summer. However, an unexpected incident has pressured them. The grief of the nation over this tragedy simply can't be ignored.

Im Seong-gyu from Lotte said, "We are thinking of every way possible. We're very cautious about it but haven't been able to come up with a clear explanation yet". This likely means the release date can't be easily postponed.

"Roaring Currents" is the first film to be released out of the three and it's going to move on according to plan. However, CJ is claiming that there is a need to watch the progress of the disaster. Whatever their decision is, they shouldn't disturb the nations' feelings.

Furthermore, "Roaring Currents" and "Haemoo" contain parts where the crew disobeys the captain. These elements would remind people of the Sewol ferry tragedy. The producers might decide to just go with the original dates, as they are unable to continually postpone the date of release.

Unfortunately, the contents of the movie could spur misunderstandings among certain individuals. It's a sensitive period for anything.

"Dilemma for "Roaring Currents", "Pirates" and "Haemoo""
by HanCinema is licensed under a Creative Commons Attribution-Share Alike 3.0 Unported License.
Based on a work from this source