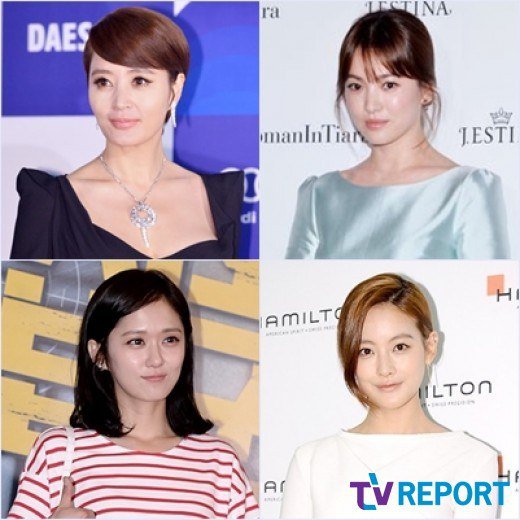 The New Year of the Monkey has come. With many new starts and resolutions going on about, many actresses are making a comeback this year.

Kim Hye-soo is coming back with a drama for the first time in 2 years. She chose "Signal" which is the story of detectives from the past and present solving unsolved crimes with a signal that comes from the past.

Kim Hye-soo takes on the role of Cha Soo-hyeon, a female detective who Jae-han's (Cho Jin-woong) sub-marker and partner to Hae-yeong (Lee Je-hoon).

The trailer for "Signal" shows Kim Hye-soo's transformation as a tough female detective.

- A man reborn as a woman – SBS "Please Come Back, Mister", Oh Yeon-seo

Oh Yeon-seo is coming back with "Please Come Back, Mister" which is the story of a man and a woman who come back to life from the other world.

Oh Yeon-seo plays Heung-nan who is actually a former gang boss named Ki-tak who comes back to the real world as a woman.

Oh Yeon-seo plays a woman with the mind of a man.

- Song Hye-kyo in "Descendants of the Sun"

"Descendants of the Sun" is a melodrama about a young soldier and doctors in extreme conditions on a foreign land written by Kim Eun-sook who is known for her hit-making.

Song Hye-kyo is working with Song Joong-ki. A teaser of the drama released have expectations between the two of them rising up.

Jang Nara is back. She's back with "One More Happy Ending" which is a romantic comedy about a girl group who were once famous and a group of men who get involved with them. They are mostly single again, single daddies or born single. They attempt to be happy and in love once again.

Jang Nara is a former idol in the drama. As young as she looks, many anticipate for this drama to be another one of her hits.

"[Coming Soon in 2016 #2] Hye-soo, Hye-kyo, Yeon-seo, Nara, 4 actresses to devour in Year of the Monkey"
by HanCinema is licensed under a Creative Commons Attribution-Share Alike 3.0 Unported License.
Based on a work from this source