CJ Entertainment Reveals Everything about my Wife 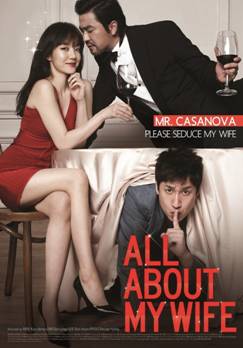 LOS ANGELES, CA (June 11, 2012) – CJ Entertainment brings the unconventional romantic comedy "Everything about my Wife" to North American screens on June 22, 2012, just weeks after it's South Korean debut where it swept to the top of the box office with over 2 million audience admissions in its first 2 weeks.

After seven years of marriage, Doo-hyun (Lee Sun-kyun) is at the end of his rope. Jung-in (Im Soo-jung), his wife, is beautiful, sexy, and a fantastic cook, but drives her husband crazy with her endless nagging and complaining. He can't even bring himself to ask for a divorce because of the fights that will follow. When Doo-hyun's company transfers him out of state, it seems like his dream of getting away is coming true. But to his horror, Jung-in surprises him by moving across the country to be with him. Desperate but too afraid to ask for a divorce, Doo-hyun recruits his next-door neighbor and legendary Casanova Seong-ki (Ryu Seung-ryong) to seduce his wife and make her leave him first. After scoping her out, Seong-ki is intrigued by the challenge and confidently agrees to seduce Jung-In as a Casanova project. Veering away from the gauzy formula of romantic comedies, Everything about my Wife is a sexy and funny portrayal of how we fall in and out of love.

Top Korean actors transform for "Everything about my Wife"
The film boasts a star-studded cast with actors well-known in the realm of romance. Lee Sun-kyun, best known for his roles in the internationally popular Korean TV series "Coffee Prince" and "Pasta", transforms into the henpecked husband Doo-hyun. Actress Im Soo-jung, a household name in South Korea, is the attractive Jung-in, who is every guy's ideal woman until she opens her mouth. Veteran actor Ryu Seung-ryong ("The Front Line", "Arrow, The Ultimate Weapon") confidently carries off the character of womanizer Seong-ki, a modern-day Casanova who knows nothing about love but is an expert in the art of seduction.

"CJ Entertainment Reveals Everything about my Wife"
by HanCinema is licensed under a Creative Commons Attribution-Share Alike 3.0 Unported License.
Based on a work from this source