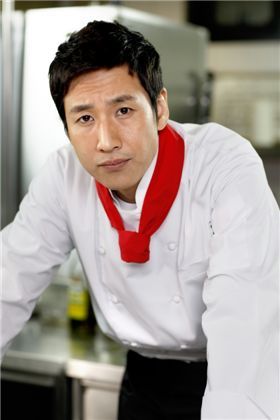 He looks normal. He sounds normal. The ease with which Choi Hyun-wook (played by Lee Sun-kyun) will try to woo a woman he has met for the first time by saying, "Do you have time tonight? What are you hesitating for? You're supposed to say no the first time", and the grin this newly appointed chef of Italian restaurant La Sfera puts on his first day as he tells the cooks at his kitchen, "This moment where you wait for the first order is always exciting. Be comfortable, do as you always have done", is as smooth as cream.

However, Choi, who has set his mind on conquering this kitchen, starts hurling a shower of insults such as " Go feed this glob of gooey hair-like pasta to your own Precious Family!", "On the move you bunch of snails!" and "Do you need some cuts in your brain to wake up?" Whoever is dating in his kitchen will be fired after hearing, "I want to tear out your intestines and hang them up like sausages!" and although he likes women, will drive them out of his kitchen, stating "There will be no women in my kitchen". He will also call one of the more dull cooks a carp but at the top of his lungs will scream "You are being impolite to the shrimp! You bunch of rude fools!" if a shrimp is not handled with the utmost care. But with time, you get used to the screaming, then addicted. The tone of his voice rings at as if unearthed from the bottom of hell.

"Choi Hyun-wook sets La Sfera on alarm in "Pasta""
by HanCinema is licensed under a Creative Commons Attribution-Share Alike 3.0 Unported License.
Based on a work from this source