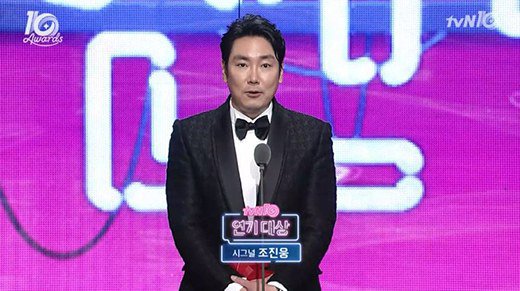 He took home the trophy for his performance in the tvN drama "Signal" as Lee Jae-han. Lee Soon-jae, Shin Goo, Park Geun-hyung and Baek Il-sub handed him the trophy.

Cho Jin-woong made a speech saying, "I don't know if I'm the right person for this trophy. I am grateful".

"While I was making the drama, I felt heavy and hurt instead of being happy and having a good time. I felt that every member of staff, producer, writer and cast had to relate to what I was saying to make the drama work".

"I realized that the crime rate is increasing and there are more people who suffer from them. I hope I did enough to deliver the message to everyone".

"I take this trophy as a means for me to progress further in the future".

"Cho Jin-woong, "Signal" was tough "
by HanCinema is licensed under a Creative Commons Attribution-Share Alike 3.0 Unported License.
Based on a work from this source