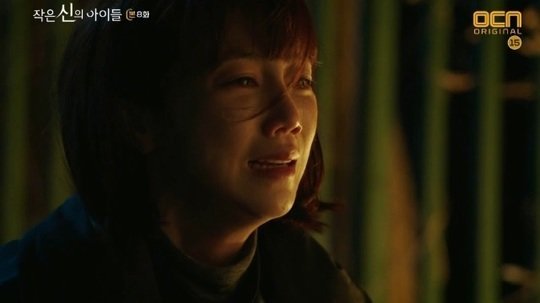 On the latest episode of the OCN drama "Children of a Lesser God", Kim Dan (Kim Ok-vin) suspected her father, Kim Ho-gi (Ahn Kil-kang), of murder.

Pastor Wang (Jang Gwang) and Baek Do-gyu (Lee Hyo-jung) talked about a girl and a woman who haddisappeared on the doorsteps of Heaven 24 years ago and said they'd kill them if they were ever found alive. At the same time, Kim Dan found out that the bodies found at the doorsteps of Heaven weren't suicide, but murder. The bodies had been broken by the neck and she remembered her father trying to strangle her.

The forensics doctor said he saw a soldier kill someone like this 20 years ago. Kim Dan told her father that 31 innocent people had died and she had to find the person who did it. She intentionally revealed some of her invstigation to her father who later burnt some of his things.

Kim Dan found the cross of Chunin Church amongst the things and cried. It was hard for her to dig up dirt on her own father. Joo Ha-min (Shim Hee-sub) decided to ally with Cheon Jae-in (Kang Ji-hwan) and suspected that Kim, also known as God's soldier, murdered the 31 people. Only a silhouette of Kim could be seen in the video.

Cheon Jae-in wanted the video analyzed and Kim Dan was afraid it would be her father. On her way to get the video analyzed, she stumbled across someone trying to commit suicide who supposedly foresaw the world ending soon.

""Children of a Lesser God" Kim Ok-vin Suspects Her Father of Mass Murder"
by HanCinema is licensed under a Creative Commons Attribution-Share Alike 3.0 Unported License.
Based on a work from this source