Child Actors an Essential Element for a Popular Drama 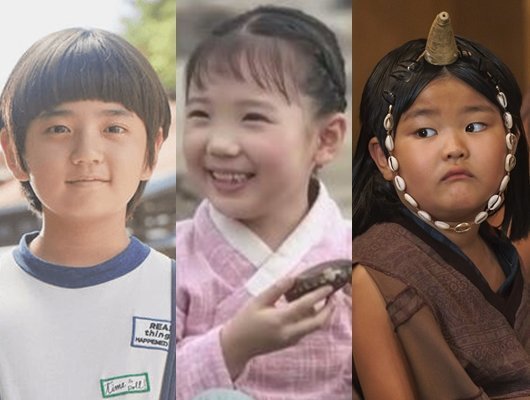 Little giants are encouraging the popularity of dramas.

The active parts played by little actors are remarkable. "When the Camellia Blooms" Kim Kang-hoon (Kang Pil-goo), "The Tale of Nokdu" Park Da-yeon (Hwang Aeng-doo) and "Pegasus Market" Um Tae-yoon (Jji-ae) are some of the scene stealers we are talking about.

Kim Kang-hoon is just as good as any grown-up actor with his performance. He played solid roles in "Mr. Sunshine" as little Lee Byung-hun (Eugene Choi) and in "Hotel Del Luna" as little Yeo Jin-goo (Goo Chan-seong). In "When the Camellia Blooms" he plays Pil-goo, Gong Hyo-jin's (Dong-baek) son who is mature, but pure at heart.

In the previous episode, he realized that Kim Ji-suk (Kang Jong-ryeol) is his father, but couldn't help but be overwhelmed as he ate. He argues that he's almost 10, but he loves it when Kang Ha-neul (Hwang Yong-sik) gives him the 'plane ride'. Thanks to Kim Kang-hoon's performance, the love triangle between Gong Hyo-jin, Kang Ha-neul and Kim Ji-suk's characters expands to the meaning of 'family'.

Park Da-yeon and Um Tae-yoon have less acting experience compared to Kim Kang-hoon, but they are just as good. Park Da-yeon, who plays Jang Dong-yoon's (Jeon Nok-doo) betrothed-wannabe and an adorable glutton, is the love messenger between Jang Dong-yoon and Kim So-hyun (Dong Dong-joo). She's also very fluent in the dialect that she has to portray, almost to a point where she could actually be a local. It turns out, the little actress is from Seoul, but her mother and grandmother are from a district with a dialect, and that's where she gets her talent from.

Um Tae-yoon even has a trending phrase. He is the youngest member of the 'human cart' tribe in "Pegasus Market". It's his trademark to make a small heart with his fingers and say 'sattu!'. His round eyes, plump cheeks, and small lips enable him to form various expressions, and he is also very fluent in the tribal language, which sounds Korean, but isn't. They say that he's just as adorable a little star on set.

"Child Actors an Essential Element for a Popular Drama"
by HanCinema is licensed under a Creative Commons Attribution-Share Alike 3.0 Unported License.
Based on a work from this source