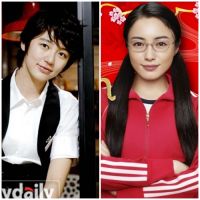 You all know Yoon Eun-hye from "Coffee Prince" and her great popularity for her acting and style.

In Japan, a famous actress Yokie has also been popular for her acting as a funny and cute teacher in "Gokusen". So now, the two actresses are rivals for the Seoul Drama Award's Best Actress Award!

The Seoul Drama Festival 2008 will be held this 29th and the two actresses have been nominated along with Lilifan from Thailand, Iris Winwell from France, and Yoohana from Thailand.

"[ChanMi's star news] Yoon Eun-hye and Yukie rivals for SDA Actress Award"
by HanCinema is licensed under a Creative Commons Attribution-Share Alike 3.0 Unported License.
Based on a work from this source