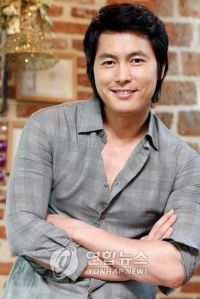 The Louis Vuitton Hawaii International Film Festival 2008 will be held next month where Jung Woo-sung was nominated the Achievement in Acting Award.

Sidus HQ company said that his acting for his previous movies have been greatly applauded for which Jeong was nominated.

This will be Jeong's first award received from a foreign film festival. Actors such as Samuel Jackson, Jang Man Wui, Watanabe Ken, and other stars have received this award before.

This film festival has been established in 1981 as the most highly recognized festival in the Oceania and Pacific regions.

"The Host" and "Love"  have been a few of our movies that were awarded before at this film festival.

This year, Korean movies "The Good, the Bad, the Weird", "Sunny", "The Chaser", "Crossing", "Dachimawa Lee", "The Divine Weapon", and "Tokyo!" have been nominated.

"[ChanMi's star news] Jung Woo-sung, nominated for Achievement in Acting Award"
by HanCinema is licensed under a Creative Commons Attribution-Share Alike 3.0 Unported License.
Based on a work from this source