[ChanMi's drama news] So Ji-sub filming hard in the desert for drama! 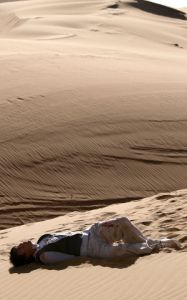 Actor So Ji-sub is working so hard in the sun to film the new drama "Cain and Abel".

It will be his return after four years and he is battling with the sand!

"Cain and Abel" will be aired on February 2009 which its first episodes are filmed in the deserts of Mongolia.

He has filmed the scene of lying on the sand and reaching to the sky seeing an image of his lost love before him.

It is known that everyone had a tough time filming these scenes in the desert, however everyone worked hard and the scene was wonderful!

"[ChanMi's drama news] So Ji-sub filming hard in the desert for drama! "
by HanCinema is licensed under a Creative Commons Attribution-Share Alike 3.0 Unported License.
Based on a work from this source