Rivaling the drama "Gourmet", 'Mighty Chil-woo' may take a risk in losing viewers with their cheap action scenes. 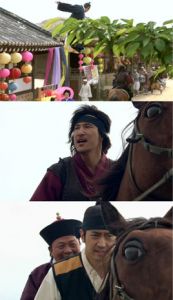 Viewers complained about the fake horses in the drama 'Mighty Chil-woo' used for closup scenes of Eric Mun from ShinHwa taking the lead role as ChilWoo chasing JaJa, Lee Eon previously from 'Coffee Prince'. It seemed as if KBS2's drama, 'Mighty Chil-woo' went back 10 years in time for using old fashioned action techniques. Way to lower the drama quality!

Korean Blockbuster movie such as 'D-War' and an MBC drama 'The Legend' have set the bars high enough that such techniques would definitely bring out criticism and dissatisfaction against such products. The viewers can't watch a drama solely because the storyline is fun. Not anymore! They ask for higher quality and some investment into these kind of scenes!