Buzzwords of Year 2010 in Pop Culture 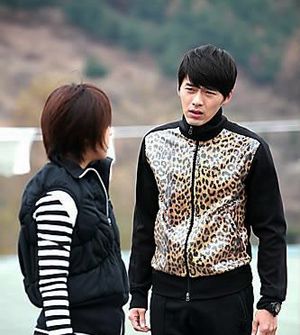 Many gloomy accidents and incidents including the sinking of corvette Cheonan and the shelling of Yeonpyeong Island had occurred throughout this year in society, but many buzzwords had also been created and greatly loved by people in the popular culture. Popular programs such as "Superstar K - Season 2","High Kick Through The Roof", and "Bread, Love and Dreams" had entered the cradle of buzzwords, and those buzzwords had been talked about for a year by people, in pleasant times as well as times of suffering. But some buzzwords had aroused criticism and could not be kept as buzzwords. For example, the buzzwords created from the KBS comedy program "Gag Concert", saying "I am Dong Hyuk's old brother", which had made viewers feel refreshed, had been criticized by a civic group, who insisted, "the phrase is an inflammatory phrase base on populism". And another phrase from the same program, saying "The terrible society that only remembers the winner", had been pointed out by a politician as an "uncomfortable comment". The buzzword "bbanggu ddonggu" had stirred controversy early this year as the words had been advised to be avoided on programs by a council. 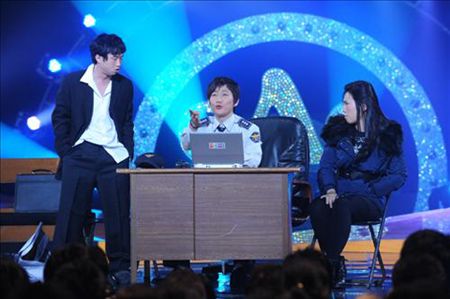 ◇ My score will be opened after 60 seconds. = "Big hit" program had created "big hit" buzzwords. The program "Superstar K - Season 2" on the cable TV channel Mnet had recorded unprecedented viewer ratings among cable TV channels by recording 18.1 percent, which wounded public TV's pride, and had left a famous buzzword, which was "It will be opened after 60 seconds". MC Kim Sung Joo made this comment before he announced the winner and loser on the program. As it revealed the characteristic of cable TV, which requires a 60-second TV commercial in the middle of broadcasting, the buzzword directly revealed this year's popularity of cable TV. In addition, the comment, "My score is", that the panel had said before they opened the score for the participants, also became very popular enough to be parodied in many other TV programs. The lines, "My name is Kim Tak Koo not because I am good at table tennis (Tak Koo in Korean) but because it is my name" that Tak Koo had said in the KBS drama "Bread, Love and Dreams", which recorded 50.8 percent viewer ratings, was also largely talked about. In addition, the lines in the MBC drama "Pasta", saying, "Yes, chef" had made this professional job become more familiar to the public.

The KBS drama "Sungkyunkwan Scandal", which had created the "mania for Sungkyunkwan Scandal", also created a buzzword, "I am Koo Yong Ha". And unique words that looked like an alien language such as "Cha Do Nam (Neo)", "Dda Do Nam (Neo)", "Ggo Pyun Nam (Neo)", and "Gga Do Nam (Neo)" were new buzzwords that had hit greatly this year. The word "Cha Do Nam", which means "a cold-hearted chic man of the city", first came from the Naver web-cartoon entitled "Sound of Mind" and it has continuously created similar words as buzzwords. Actor Kim Jae-wook in the KBS drama "Marry Me, Mary!" and actor Lee Min Ho in MBC drama "Personal Taste" are the typical characters that symbolize "Cha Do Nam". And actor Park Si-hoo in the MBC drama "Queen of Reversals" created another word "Ggo Pyun Nam", which means "an attractive man", and actor Hyun Bin in SBS drama "Secret Garden" has been greatly loved as a "Gga Do Nam", which means "a mean man of the city". The MBC sitcom drama "High Kick Through The Roof", which finished airing in March, also created many popular buzzwords such as "bbanggu ddonggu", "That's all", "Jewelry Jeong", and "Mr. Sun Dae". In the KBS comedy program "Gag Concert", which is the cradle of buzzwords, phrases like "The terrible society that only remembers the winner" and "Who will raise the cow, then?" came out and they were also greatly popular 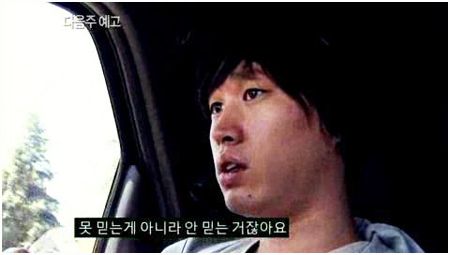 ◇ Bitter buzzwords that reflect the social aspect = Comedian Park Sung Kwang's comment in the feature of "World that makes me sad" in the KBS comedy program "Gag Concert", saying "The terrible society that only remembers the winner", had been attacked by political circles. A member of the National Assembly, Han Sun Kyo (Grand National Party), had commented about the phrase as an "uncomfortable comment" in April, and the once popular feature then soon came to a finish and the phrase gradually disappeared from the "memory of the public". Singer Tablo,who had suffered from the accusations of forgery about his academic background, commented on the current affairs program entitled "MBC Special, Tablo Goes to the Stanford", "The problem is not that you cannot trust, but the problem is that you do not trust", and his utterance also became popular and appeared again at the news conference when the head of the Korean Film Council, Cho Hee Moon, had resigned. He said, "It is not the problem that you cannot trust the policy of the Korean Film Council, but you do not trust me". In addition, the word "blacklist" had become popular in the broadcasting industry. Comedian Kim Mi-hwa had said, "There is a 'blacklist' in KBS and I am included on the list", and the word "blacklist" that used to appear in any conspiracy theory has ironically become more familiar to the public.

Kim Je-dong, who had experienced controversy concerning his appearance on a TV program, said at the lecture that he gave at Harvard Law School, "If people call me as 'the left' only because I hosted the ceremony to commemorate the passing away of the late president Roh Moo Hyun, I am willing to become 'the left'," and his comment became greatly popular.

The word "joint", that was once hardly said outside military camps, also became a buzzword as the former head of the board of the MBC Foundation for Broadcast Culture, Kim Woo Ryong, said it during an interview with the press.

"Buzzwords of Year 2010 in Pop Culture"
by HanCinema is licensed under a Creative Commons Attribution-Share Alike 3.0 Unported License.
Based on a work from this source