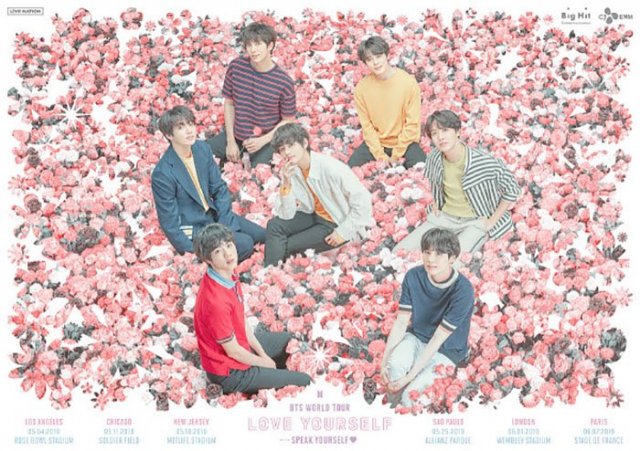 Tickets for a concert later this year by BTS at Wembley Stadium in London sold out in just 90 minutes.

The venue confirmed in a tweet Friday that BTS sold out all tickets for their June 1 concert there.

That makes BTS only the 12th musical act to sell out the venue, joining the ranks of superstars such as Beyonce, Eminem, Madonna, Michael Jackson, Oasis and Queen. The boys are the first Korean act to perform at Wembley.

Thanks to the explosive interest, BTS announced an additional concert for June 2, for which tickets will go on sale on March 8.

Wembley Stadium in northwest London is the fifth-largest football stadium in the world, with a capacity of 90,310.

The London shows are part of BTS' "Love Yourself: Speak Yourself" world tour, which kicked off in Seoul in August last year.

"BTS' Wembley Stadium Concert Sells out in 90 Minutes"
by HanCinema is licensed under a Creative Commons Attribution-Share Alike 3.0 Unported License.
Based on a work from this source