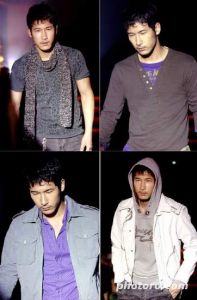 The 27-year-old had been considered an up-and-coming talent and had recently appeared in KBS' "Mighty Chil-woo".

Eon reportedly died from a broken neck after crashing into the guardail of an overpass in Hannam-dong, Seoul. He was riding home from a party celebrating the last airing of the KBS drama.

Originally a wrestler, Lee Eon turned into a professional model and then made his film debut in 2006. In "Mighty Chil-woo" he played the role of Jaja, one of a group of assassins led by the main character Chilwoo. He also appeared in the hit drama "Coffee Prince" last year.

"[BRIEFLY] Model-turned-actor Lee Eon dies"
by HanCinema is licensed under a Creative Commons Attribution-Share Alike 3.0 Unported License.
Based on a work from this source