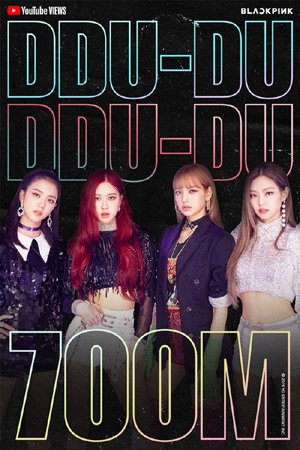 Girl group Black Pink has set another record on YouTube with their onomatopoeia-driven song.

The music video for "Ddu-Du Ddu-Du", the lead track off their first mini album, garnered 700 million views on YouTube as of Saturday, becoming the first K-pop song to achieve the milestone, according to their management agency YG Entertainment.

The milestone came 266 days after the song was released on June 15 last year, attracting 100 million views at the fastest pace among any K-pop girl group.

And in January it reached 600 million views at the fastest pace among any K-pop group.

Black Pink now have three songs that have drawn over 500 million views on YouTube. The other two are "As If It's Your Last" and "Boombayah".

"Black Pink Set New K-Pop Record on YouTube"
by HanCinema is licensed under a Creative Commons Attribution-Share Alike 3.0 Unported License.
Based on a work from this source