BIGBANG's MADE Tour coming to DramaFever 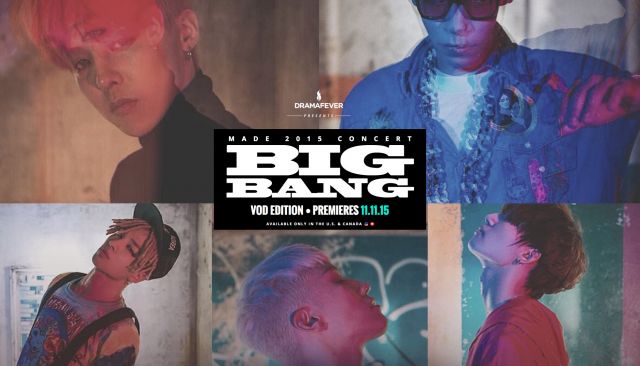 Cameras Followed the Korean Music Idols During "BIGBANG: MADE 2015 Concert" in the US

DramaFever (dramafever.com), the top online video destination for international TV series and movies, announced today their first original production, documenting the recently-concluded U.S. tour of one of the biggest bands in Korean pop music, BIGBANG. This is the first fully-original production of DramaFever, which in the past has co-produced two drama series – "The Heirs" (with Hwa & Dam Pictures) and "Tomorrow's Cantabile" (with Group 8) – and is its first to be unscripted. The documentary titled, BIGBANG: MADE 2015 Concert will premiere on 11/11/15 and be available to all users, free and ad-supported. For DramaFever's premium subscribers there will be a special sneak peek of the concert on 11/6/15.

"The ability for music to cross barriers and transcend culture is undeniable. It's one of the reasons K-pop has become a global phenomenon. As one of the biggest and most unique acts, BIGBANG has set itself apart as the vanguard of the genre. This is why the 'BIGBANG: MADE 2015 Concert' is our first foray into original programming", said Suk Park, President of DramaFever. "It's clear from our internal metrics that our core audience of multicultural millennials are rabid fans of K-pop. We look forward to hearing their response".

The production, which followed the band throughout its U.S. tour to Los Angeles, Las Vegas and New Jersey, is directed by Mark Haney – an award-winning live music director with over 1,500 shows under his belt, including those featuring Jay Z, Rhianna and Brittany Spears. Collecting on-stage footage and candid moments, "BIGBANG: MADE 2015 Concert" will bring a new vantage point to the much buzzed about concert tour that completed last month.

BIGBANG is made up of individual members G-Dragon, T.O.P (Choi Seung-hyun), Taeyang, Daesung, and Seungri. Debuting back in 2006, the group has become known for their cutting edge fashion and hit songs that blend pop, hip-hop and EDM, with the "Made Tour" supporting their most recent album.

Leading into this premiere, DramaFever has been rolling out all of BIGBANG's past concert documentaries, an excellent primer for anybody unaware of the group. You can find more information about these past concerts and the upcoming exclusive concert here: dramafever.com/bigbang/