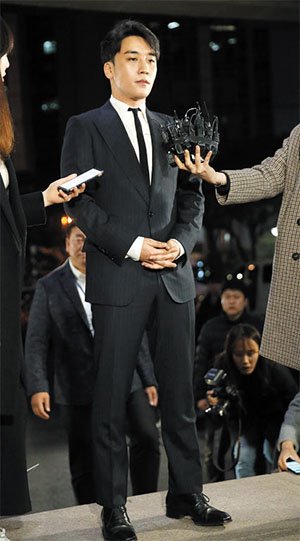 Police has booked Seungri of boy band Big Bang on charges that he supplied prostitutes for foreign investors, it said Sunday.

Police also raided a nightclub in the affluent Gangnam area of southern Seoul believed to be the place where Seungri sent his foreign investors for prostitute services.

Seungri has been investigated on pimping charges, which followed other allegations last month that the glitzy nightclub called Burning Sun he co-owned supplied drug to customers and let sexual assault happen on the premises. The club has since closed.

The pimping charges surfaced when an entertainment news website published what it claimed were text messages sent by Seungri telling a staffer to bring a foreign investor from Taiwan to the nightclub Arena to meet escorts. Seungri denied the charges and said the messages are fake.

But police said that analysis of the messages showed "there is enough reason to launch an investigation".

With regard to the drug scandal involving his club, Seungri himself has passed a drug test, which showed no traces of narcotics in his hair samples.

The police probe has expanded to cover alleged tax evasion by posh night clubs in Gangnam. Police said they raided the Seoul office of the National Tax Service and are investigating tax officials on suspicion of illicit ties with clubs in Gangnam.

The office audited Arena's books and told police six co-owners of the club owed W15 billion in back taxes (US$1=W1,137).

"Big Bang's Seungri Booked on Pimping Charges"
by HanCinema is licensed under a Creative Commons Attribution-Share Alike 3.0 Unported License.
Based on a work from this source