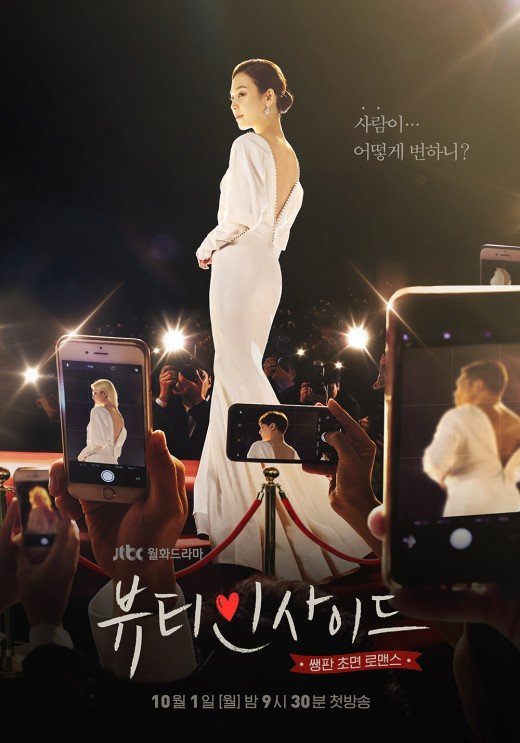 "Beauty Inside" released a poster with Seo Hyun-jin as the hightlight.

"Beauty Inside" is a romantic drama about a woman who lives as a different person every week a month and a man who doesn't recognize other people's faces for twelve months in a year. Seo Hyun-jin and Lee Min-ki come together for this new JTBC drama.

The poster shows Seo Hyun-jin standing on the Red Carpet under the spotlight. She is Han Se-ge, a top star who everyone wants a picture of. However, on their cell phones, the pictures are not of Seo Hyun-jin but different people in each phone. The writing on the poster, "How does someone change?" increases the anticipation for the drama.

Seo Hyun-jin takes on the role of Han Se-ge, a top star whose face changes every week a month. She's a trouble maker with rumors and gossip but she's also known as 'the woman of hundred faces' because the performance she puts on. By fate, she meets Seo Do-jae who gets involved with her on contract.

The fun point of "Beauty Inside" is about an actress who changes face every month and the only man who can recognize her due to his disability to recognize faces. What looks like can never be, works its magic around their secret world.

"Beauty Inside" begins on the 1st of October.

""Beauty Inside" Releases Elegant, Insightful Poster"
by HanCinema is licensed under a Creative Commons Attribution-Share Alike 3.0 Unported License.
Based on a work from this source