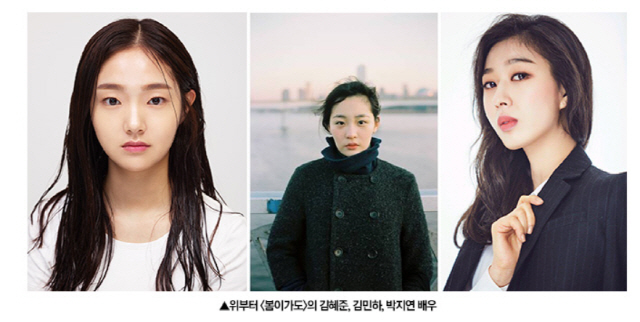 "After Spring" is a family movie that will warm up theaters this Chuseok starring Kim Hye-jun, Kim Min-ha, and Park Ji-yeon-II.

On top of these rookies are veteran actors like Yoo Jae-myung, Jeon Mi-sun and Jun Suk-ho who consider "After Spring" the movie that stands out most in 2018.

"After Spring" is about a mother who waits for her daughter dearly, a sole survivor who is lucky to be alive, a husband who is devastated by the traces of his wife, and those who live on with memories of spring.

Kim Hye-jun plays Hyang-i, the daughter Sin-ae longs for, Kim Min-ha is Hyeon-jeong, the daughter of a man who was lucky to be the sole survivor, and Park Ji-yeon-II is the wife who is the most precious memory to a man named Seok-ho.

Kim Hye-jun is a rising star in Chungmuro. She starred in web-dramas and made a name for herself. Then she starred in "Just Lovers" as Lee Junho's sister and displayed mature acting. She then appeared in writer Kim Eun-hee-I's "Kingdom" as a character with impact and even landed herself a title role in Director Kim Yun-seok's "Another Child".

Kim Min-ha is co-starring with Yoo Jae-myung as his daughter for the first time. Before this, she'd been in several short films, commercials and dramas. In "After Spring" she's becoming a teenage daughter who is grown-up enough to take care of her father.

Another rising star in Chungmuro, or Korean film, is Park Ji-yeon-II who is lovers with Jun Suk-ho in "After Spring". She's starred in several short films such as "OJET", "Picnic", "Confession", "Night Swimming", "Her Squad", "Apology" and more. She turns into a wife that exists only in her husband's memory.

"After Spring" was released on the 13th of September.

""After Spring" Kim Hye-jun, Kim Min-ha, and Park Ji-yeon-II Bring Heartwarming Film for Chuseok"
by HanCinema is licensed under a Creative Commons Attribution-Share Alike 3.0 Unported License.
Based on a work from this source