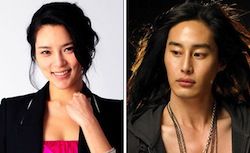 Popular actress Park Si-yeon and model-turned-actor Lee Philip denied Thursday a report that they have been dating.

A local sports daily reported that the two have been dating for about four months after becoming friends when they were cast together in a KBS2 TV drama in May.

However, officials from their agencies denied the report, saying that the actors are Just Friends?.

"We have said it's not true. They have not developed a romantic relationship, though they are close", said an official from the agency representing Lee.

"They have been getting together often, but they are not dating", an official from the agency representing Park said.

Lee rose to stardom after playing Cheoro on MBC TV's "The Legend" (The Four Guardian Gods of the King) in 2008.

Park, a runner-up at the 2000 Miss Korea pageant, has appeared in a number of TV dramas and movies, including "Marine Boy", and "Dachimawa Lee".

"Actress Park Si-yeon, Lee Philip Deny Dating"
by HanCinema is licensed under a Creative Commons Attribution-Share Alike 3.0 Unported License.
Based on a work from this source