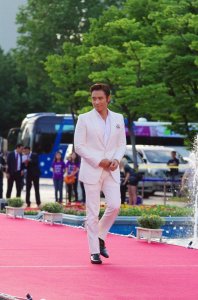 Top actor Lee Byung-hun was honored with the Seoul Tourism Award Thursday in recognition of his promotion of the capital city to both foreigners and locals.

He is among five people and six organizations acknowledged by the award for their contribution to portraying and boosting the beauty and lively aspects of Seoul.

The Seoul Municipal Government said Lee, who appeared in the major Hollywood flick "G.I. Joe" and some other transnational films, was selected for promoting Seoul through his latest TV drama "IRIS" and due to his wide fan base ranging throughout Asia.

In order to attract more Japanese tourists to the country, the administration authorized the closing off of Gwanghwamun Plaza, one of the most crowded areas in central Seoul, for the filming of one of the major action scenes in the drama. A smart move as "IRIS" marked the highest rating for a Korean drama airing in Japan.

Kim Tae-ho, director of the MBC's ever-popular entertainment program, "Muhandojeon (infinite challenge)", was awarded in the journalist category for featuring the Seoul Design Olympics, N Tower in Mt. Nam and other tourist spots in the program.

Other recipients are Robert Koehler, author of a comprehensive tour and living guidebook, Seoul Selection Guides and Ruby Shin, a Chinese actress who appeared in the sensational and highly-rated Chinese TV drama "The Emperor's Daughter".

Mayor Oh Se-hoon presented the awards in a ceremony at the Grand Hyatt Hotel in Mt. Nam.

"Actor Lee Byung-hun wins Seoul Tourism Award"
by HanCinema is licensed under a Creative Commons Attribution-Share Alike 3.0 Unported License.
Based on a work from this source