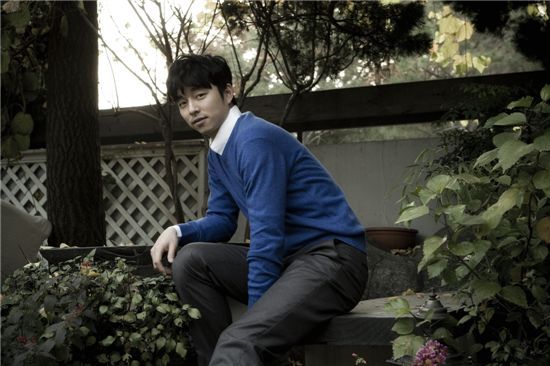 "It's not easy to pick just a few", actor Gong Yoo remarked with a sigh as he unfolded the A4 paper filled with numerous names of musicians and albums. "Lucid Fall's 'Night At The Border' is good but all of his albums are actually good and 'Greetings (Feat. Kim Yeon-woo)' in TOY's 6th album "Thank You" is the song I promised to sing on KBS music show 'Yoo Hee-yeol's Sketchbook.' Oh, and E Z yung's 'Spring Miracle' is great, too. These days I'm also listening to a lot of No Reply and..."

It was quite refreshing to see this side to the tall and handsome Gong Yoo who is fit to be more of an outdoor man -- as a matter of fact, he did appear as a popular baseball player Park Chul-soon in the film "Mr. Gam's Victory" (2004) -- so hung up with music. Perhaps this side of him is closer to the most recent character he played in the film "Finding Mr. Destiny" (2010), a meticulous man of principle named Han Ki-joon, who travels all the way to India in search of his client Ji-woo's (Lim Soo-jung) first love whom she met there without a clue to what his age is, his hometown, school nor anything else.

In that film which is his first project since being discharged from the military late last year, Gong presents a unique character that looks tall and handsome on the outside but is actually timid and always bearing an expression as if he has been wronged. Of course his 'romantic guy' image is all revived through the flashback of Ji-woo's first love who happens to look exactly like him. Gong Yoo is back to display a different kind of charm from when he played Choi Han-gyeol in MBC series "Coffee Prince" (2007) that captured the hearts of many women, and thus, demonstrating that he has matured both as a man and an actor since then.

"As an actor there are times when you turn edgy, from loneliness or hardships which you can't confide openly and have to keep to yourself. So in order to help myself get over such feelings I came to listen to music a lot, up to the point of thinking that perhaps these singers may know how I feel (laugh). In that sense, musicians seem to have more freedom in delivering their feelings or messages than actors who have to do it through the framework of given characters. That's what I envied about them and why I tried to invite as many indie bands as possible to my radio program "20:00 p.m. with Gong Yoo" at Defense Media Agency when I was serving in the army to try to help spread their music. It was wonderful doing my job as a DJ and coming to understand the message of their songs".

So here are the albums that Gong Yoo selected regardless of genres and more as a listener, as a member of the audience and as an actor.

Of the many albums Gong Yoo had, this was the first he recommended: the seventh album of songstress Park Ji-yoon who returned in 2009 as a singer and a writer after six year hiatus. "Most people associate her with the sexy image from the song 'Coming of Age' but I feel that she has finally found her true self with this album. Although other great musicians like Lucid Fall and Dear Cloud took part in this album, there was this one particular song 'You're Like A Tree' that was both composed and written by Park herself. I felt that she has put much of her ideas and thoughts into it and when I think about how much she must've wanted to do her music all those years, I felt touched and actually proud of her even though I Don't Know Her in person. I was sorry I didn't get a chance to invite her to my radio program. But anyway, whenever I mention her people just think that I like her because she's pretty (laugh)".

"I was his fan for a long time. His song "The Shadow of Parting" in his first album released in 1991 is still cool even when you listen to it now. One thing I noticed as I listened to the sixth album was that classics last forever. Just like good actors, there are musicians who can maintain one's color even if they don't go against mainstream music, sometimes even leading the trend. I feel a great amount of respect toward such people because they make sure people understand what they created instead of leaving them dumbfounded. Instead of leaving the listeners far behind in pursuit of their own world, they control their pace as they move onward and that's the truly amazing because I know that isn't an easy thing to do".

"Casker has also been one of my favorite bands for quite some time. For the past few years I noticed emergence of new bands that does music similar to Casker but since I'm still sticking to Casker I guess I really love their music. Jo Won-sun's vocals are good too but since I'm crazy about Lee Yung-jin's vocals, I feel that their fifth album is the pinnacle of their work. Not much has changed for the band all these years but I like it that way, continuously doing music that makes them 'Casker.' I'm no music expert so I can't detail you on the technical parts but I believe that with the passing of time, something naturally accumulates within your music that makes the music made in the 30s different from that made in the 20s. What I feel is the difference in maturity".

"My favorite is the sixth track 'Lean..on you' followed by eighth track 'Why', ninth track 'I Love You', and the 10th and the last tack 'Good Bye' which is all very good and teary". The world has changed allowing people to simply download music cut in single units but Gong still seem to prefer buying albums and listening to all songs from start to beginning in the given order. "I came to know Mate by their title track of their first album 'I Miss You' which was so good that I'm still listening to them. They're mostly into modern rock but their music is by no means unkind or difficult as they incorporate popular codes in their work, too. I once invited them to my radio show, purely for my likes and I remember Jung Joon-il who does keyboard and vocal was most forward in fashion sense (laugh)".

"I liked the title song "Love Again" from their second album so much that I once recommended this to director Lee Yoon-jung who was in charge of MBC drama "Coffee Prince" (2007). Then she called me one night saying that she was having a drink with NY Fish and that I should talk to him because she told him I'm his fan. She passed the phone to him and there, the man himself said in a slightly tipsy voice "Thank you for loving the work of a penniless musician. I love you!" and he was so happy. I have actually come across many indie band musicians who are surprised that celebrities like their music too. I completely act like an avid fan when I meet them in person, asking them when their next album is due and for those who come to my radio program, I make sure to receive their autographs. It got a little weird, however when they asked for my autographs, too (laugh). 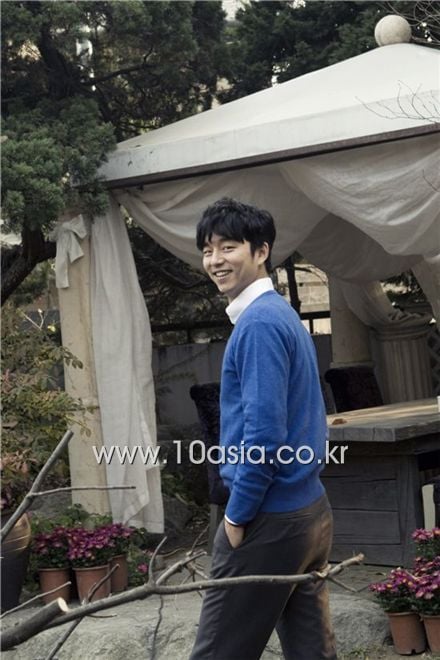 Actor Gong Yoo poses during an interview with 10Asia. 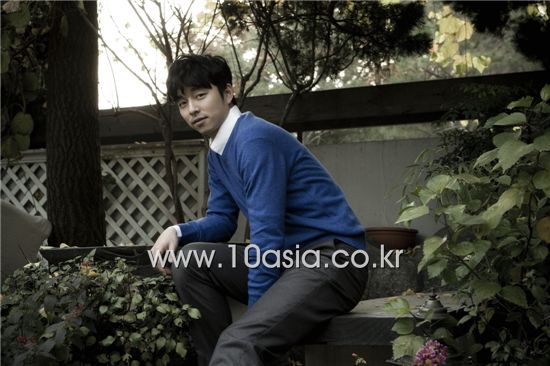 Actor Gong Yoo poses during an interview with 10Asia.

"Actor Gong Yoo's song picks "
by HanCinema is licensed under a Creative Commons Attribution-Share Alike 3.0 Unported License.
Based on a work from this source