2NE1 Rises to International Fame in Music  and also in fashion! 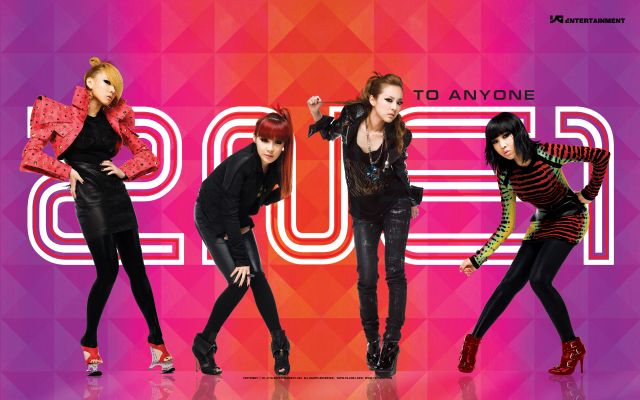 2NE1 album cover for their first officially released album "To Anyone".

Among hundreds of celebrities, only a select few become mega-stars, and they require more than just beautiful faces and nice bodies. When 2NE1 debuted in September 2009, they quickly rose to stardom, breaking new ground for girl group singers in the Kpop industry by shattering the stereotypes previously set for a "Korean girl group" – pretty, but rather bland, lacking in personality.

2NE1 first became known to the public through the song, "Lollipop", digitally released in early 2009, as a promotion song for an LG Cyon mobile phone commercial. It was a joint release with Big Bang, the hottest all-boy "Idol" group in Korea, as well as sharing the same label, YG Entertainment. "Lollipop" immediately hit No. 1 on various online charts as well as on several music television shows for over three consecutive weeks.

2NE1 officially debuted in May 2009, with another digitally released song, "Fire". The song had two versions of music videos – space vs. street version – both displaying markedly outstanding senses of style. Based on traditional Hip Hop such as the latest selections of New Era caps, each member of the group showed off her unique style. This successful debut only marked the starting of 2NE1's glamorous parade of fame, spreading their name not only in music but also in the fashion industry, both at home and overseas.

2NE1 recently released its first full-length album "To Anyone" in September 2010, with three title tracks – "Go Away", "Clap Your Hands" and "Can't Nobody" – all topping numerous web-based and televised music show charts in no time. The fans picked 2NE1's first three music videos to be the most anticipated of the season. Their colorful images and dynamic performances with rather exaggerated make-up and hair always captured viewers' attention, soon turning into the latest fashion trend. (Rumor has it that 2NE1's new music videos have caused make-up bloggers to work overtime to copy all of their looks.)

Late in 2010, YG Entertainment announced that none other than Black Eyed Peas' Will.i.am., also a celebrated producer, would be producing and helping 2NE1 with their American debut. Through Mnet reality TV show, "2NE1 TV Season 2", (Season 1 having been completed in September 2009), the friendly relationship between 2NE1 and Will.i.am has already been revealed to the public, as some episodes consist of footage of the girls collaborating with Will.i.am, including scenes at Will.i.am's personal recording studio. It has been reported on the official YG Entertainment website that the quartet visited London and Los Angeles to record 10 songs produced by the rapper himself – also to be found in segments of "2NE1 TV Season 2".

More recently, Will.i.am tweeted about 2NE1's upcoming album. Will.i.am. expressed much excitement and enthusiasm in producing 2NE1's English album, as he wrote, "I can't wait to finish 2NE1's album… what we have so far is soo soo good…", in reply to a fan. And 2NE1 further confirms his statement by showing confidence in the effort put into making the album, and by calling it "a masterpiece" on their official Facebook page. 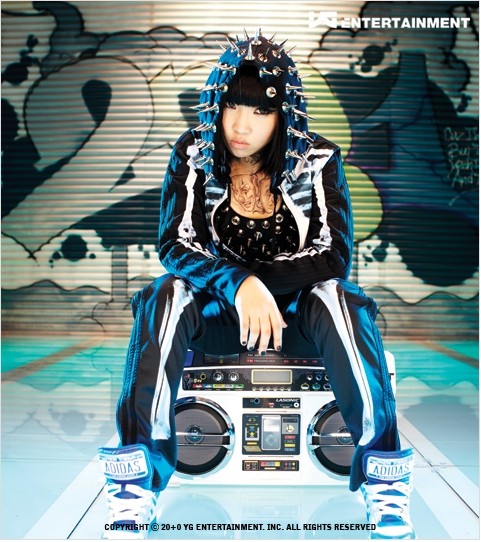 In addition to being a major presence on the Kpop scene, 2NE1's stylish fashion and branded outfits have also allowed them to win the title of "new trendsetters" in Korea. In releasing their latest album "To Anyone", for example, the group members wowed the audience by performing in a collection of high fashion brands, including Alexander Wang, MCM, Christopher Kane, and above all, Jeremy Scott.

Jeremy Scott is a famous designer who took the world by storm with his quirky designs and his fans include celebrities such as Britney Spears, Rihanna, and Victoria Beckham. Ever since their debut, 2NE1 have been spotted in numerous Jeremy Scott designs head-to-toe, including accessories. And fans were surprised when Jeremy Scott publicly announced his affection for the group via a tweet. He had an opportunity to dine with the girls after collaborating in a photo shoot during his Korea visit in 2010, and while spending some time together, Scott eventually grew to have a liking for the group. He has expressed his affection for all members of 2NE1, but it has been widely noted that he adores CL, the leader of 2NE1, and has maintained a close friendship with her ever since.

It is now a well-known story that Scott made special clothes for 2NE1 as gifts when he heard the news of them releasing their first full album. So far only Minzy's gift has been revealed to the fans; it is the blue training gear with spiked hood found in the music video of "Can't Nobody" and Minzy rocks in the outfit. According to an interview with an associate of YG Entertainment, the rest of Scott's gifts still remain secrets.

Scott appeared in "2NE1 TV Season 2" along with Will.i.am. of Black Eyed Peas. They are reported to have dined together when the girls visited Los Angeles to prepare for their American debut album. A number of fans noted that 2NE1 members have been sharing and re-wearing some of the Jeremy Scott apparel, one of the most worn pieces being the Football Jersey in collaboration between Adidas and Jeremy Scott. 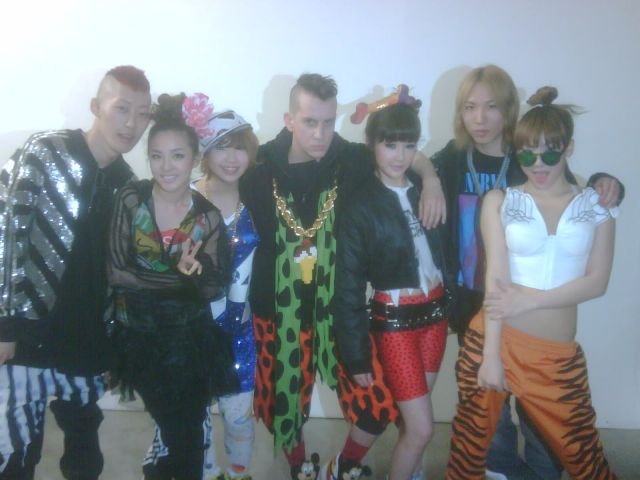 2NE1, their stylists, and Jeremy Scott before getting started on their night out - "family portrait", as JS puts it via his tweet

Scott also appeared in the 2010 O'live OnStyle Style Icon Awards not only to accompany 2NE1, the only female girl group that attended the Awards, but also to commend his dashing quartet for winning the most Fashionable Female Group prize. 2NE1 and Jeremy Scott walking down the red carpet was one of the highlights of the event, as many fans recall. The girls were dressed in Jeremy Scott collection (no surprises there) making a bold fashion statement, especially CL. 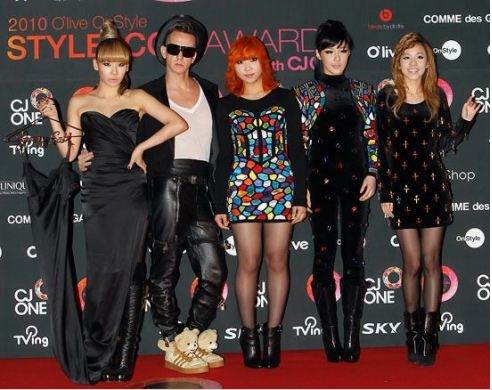 2EN1 and Jeremy Scott at 2010 O'live OnStyle Style Icon Awards, all dressed in Jeremy Scott collection; CL's hanger dress is a definite highlight of the event!

As one reporter puts it, "the limelight was definitely on CL and her hanger dress. The satin dress is gorgeous and ridiculous at the same time, but absolutely perfect and appropriate for the event", overall summing up the general opinion on her look at the scene. Fans expressed much admiration for CL's boldness for wearing such a daunting dress, although the general feeling was that CL's confident attitude almost always allows her to look good, even in the most unconventional outfit.

Jeremy Scott has also tweeted a picture of him and 2NE1 at the Adidas–Jeremy Scott promotion party in Seoul last year, all fashionably dressed up, way above the industry standard; and another friendly portrait with CL riding down Seoul city on their way to attend the MCM 2010 Fall/Winter collection held at Seoul Lotte Hotel. And the list continues.

Most recently Jeremy Scott appeared in "Project Runway Korea Season 3" as a guest judge. The mission was to create a stage outfit for CL, his favorite Kpop star. A staff member working on the show claims that Scott flew all the way to Korea especially to take part in the program with CL.

According to the news feed on the official website of YG Entertainment, 2NE1 recently made their debut in Japan for Avex (Japanese entertainment label) last month, though they were soon forced to return to Korea due to the disaster hitting Japan. All four girls made their way home safely the weekend of March 13th. They sent their thoughts to those suffering from the earthquake and tsunami in Japan, and wished everyone safety. Despite the shortened period of their stay, 2NE1 made big enough impact in the Japanese market to expand their popularity there.

Meanwhile, the global music and fashion stars 2NE1 will possibly be releasing a comeback Korean album in May or June 2011!

"2NE1 Rises to International Fame in Music  and also in fashion!"
by HanCinema is licensed under a Creative Commons Attribution-Share Alike 3.0 Unported License.
Based on a work from this source