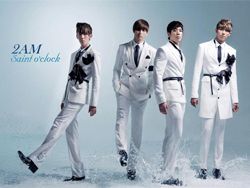 One of the most representative music sites in Korea, Melon, took at a look at the past year to see which artists were included in the top 20 on their charts the most often. The verdict Jo Kwon, Lee Changmin, Im Seulong, and Jeong Jinwoon who make up the popular idol group 2AM. Through their group releases, solo releases, duets, featurings, OST contributions, etc., the four men of 2AM have been in the top 20 16 times during the past eleven months of 2010.

Moving into May, 2AM contributed to the OST for the drama "Personal Taste" with their song "Like A Fool". The song reached 16th place, while "I Was Wrong" continued to stay in the top 20 at number 18. In June, this time member Im Seulong did a duet with popular singer IU. Their song "Nagging" reached second place that month, and only dropped one spot to number three for the month of July. Meanwhile, Jo Kwon's solo release "The Day I Confessed" was successful at number four.

In August, Lee Changmin decided to break off from the group with a duet that he did with 8eight member Lee-hyun. Their song "Still Ate Well" was such a hit that it took the number one spot. Further down the rankings, "Nagging" held onto 17th place. Come September, "Still Ate Well" was still doing well at number four.

Jo Kwon did another solo project in October, this time helping out his former vocal instructor, Im Jeong-hee for her comeback song "On The Way To Break Up". The song reached number ten on the charts, partially thanks to Jo Kwon's featuring contribution. And most recently, though this past month of November was dominated by Super Star K finalists, 2AM still managed just fine with their first full-length album "Saint o'Clock". Their song "To You Who Won't Pick Up The Phone" reached number two, while "Like Crazy" managed to hit number eight.

With such a consistently successful record, it's safe to say that 2010 was not a shabby year for the group!