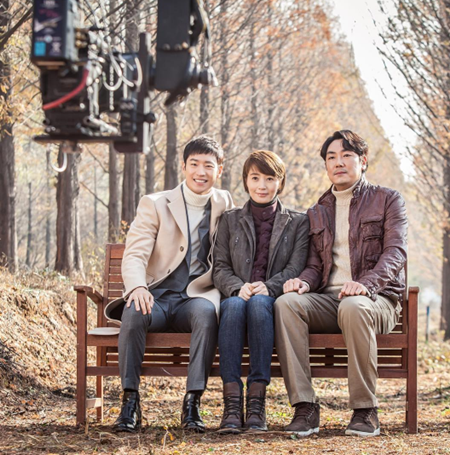 tvN's Friday & Saturday drama, "Signal" has unveiled a behind-the-scenes image of their poster.

tvN has released the image on their official Instagram on February 10th.

"Signal" three actors Kim Hye-soo, Cho Jin-woong, and Lee Je-hoon are sitting together on a bench and looking into the camera lens in the image a bit awkwardly.

It seems that the image was taken during the last fall since you can see a lot of dried fallen leaves on the ground.

"Signal" is a drama produced based on a semi pre-production system. The drama started filming since the last fall and the last half part of the drama is being filmed currently. It's been known that writer Kim Eun-hee-I has finished writing all of the 16 episodes in the beginning of this month.

"'Signal' unveils Kim Hye-soo, Cho Jin-woong, Lee Je-hoon's behind-the-scenes image for the drama poster"
by HanCinema is licensed under a Creative Commons Attribution-Share Alike 3.0 Unported License.
Based on a work from this source