'Seoul's Got Soul' Coming to A Country Near You 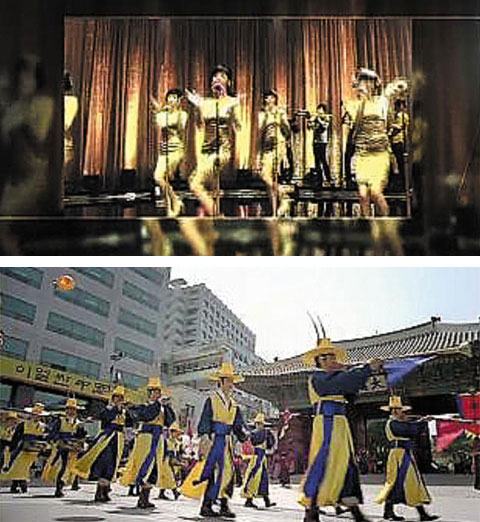 Scenes featured in a National Geographic documentary about Seoul: the manufactured band Wonder Girls (top) and the ceremonial changing of palace guards in front of Deoksu Palace in Seoul /Courtesy of Seoul Metropolitan Government

The National Geographic Channel has produced a 45-minute documentary about the Korean Wave called "Seoul's Got Soul" that will air in 59 countries including Japan, France and the U.S., the Seoul Metropolitan Government announced on Monday.

The documentary probes a range of subjects, including several projects launched by the provincial Seoul government to promote Korean culture overseas, and the success of the K-pop group Wonder Girls in the U.S. It also travels to Seoul's Hongik University area and revisits sites where the popular Korean TV series "Coffee Prince" was filmed.

Seoul began working on the project with producers at NGC during last year's FIFA World Cup in South Africa. Inspired by the footage of red oceans of Korean soccer fans at previous World Cups, NGC expressed its desire to capture footage of Koreans supporting their national team at Seoul Plaza last summer. The government decided to cooperate and the project wrapped up last month after 10 month' filming.

This is not the first time Seoul has collaborated with foreign broadcasters on a project aimed at promoting the country.

In 2005, it worked with the Discovery Channel to produce a video introducing the newly restored Cheonggye Stream in the heart of the capital. Three years later, the government cooperated on another documentary entitled "Hip Korea" featuring actors Rain, Lee Byung-hun and figure skating star Kim Yu-na. The documentary focused on their lives in Seoul and was aired throughout Asia.

"Seoul's Got Soul" has already been broadcast in parts of Southeast Asia, including Thailand and Malaysia. It hit Korean television screens on Monday and will screen in Taiwan next month, followed by Japan and the U.S. in August, according to a spokesman for the Seoul government. An English-language version of the video will also be made available on the government's homepage.

"What is significant is that, while previous works tended to concentrate on tangible infrastructure, such as the 63 Building, old palaces or the 1988 Olympic Games, this one focuses on culture, notably the Korean Wave", said the official.

"'Seoul's Got Soul' Coming to A Country Near You"
by HanCinema is licensed under a Creative Commons Attribution-Share Alike 3.0 Unported License.
Based on a work from this source