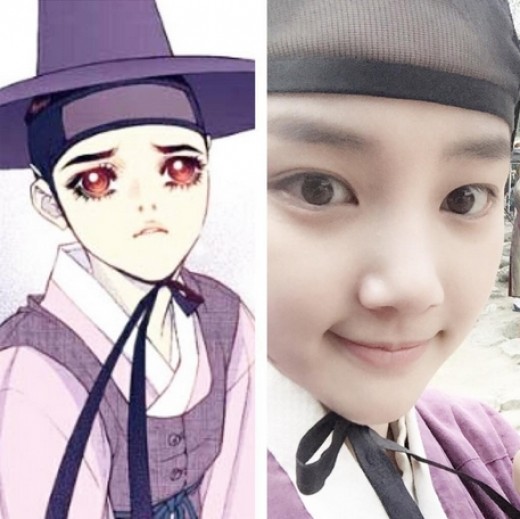 Actress Lee Yoo-bi showed off '100 synchro rate' with her character out of the original cartoon.

On July 2nd, Lee Yoo-bi posted her photo on her personal Instagram with a short caption, 'Sync 100%'.

In the revealed photo, Lee Yoo-bi just looks like the cartoon character, Yang-seon, from the original cartoon. Her fresh and cute facial expression and beautiful presence even disguised in the men's clothes raises the anticipation level.

'Scholar Who Walks the Night' starring Lee Yoo-bi as Yang-seon will air its first episode on July 8th.

"'Scholar Who Walks the Night' Lee Yoo-bi transforms into the cartoon character, Synchro Rate 100%"
by HanCinema is licensed under a Creative Commons Attribution-Share Alike 3.0 Unported License.
Based on a work from this source